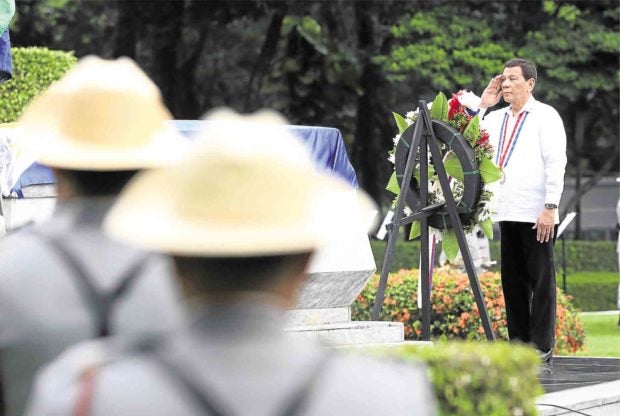 President Duterte on Monday appealed to the nation to honor ordinary Filipinos who have improved the lives of their families and contributed to the betterment of their communities through their bravery and sacrifices.

Leading the celebration of National Heroes’ Day at Libingan ng mga Bayani in Taguig City, Mr. Duterte also urged the nation to follow the example of these Filipinos.

“Let us honor ordinary Filipinos who, despite the challenges that come their way, continue to work for the well-being of their families, the betterment of their communities, and the advancement of our nation,” Mr. Duterte said.

These everyday heroes should be emulated by the country’s youth, the President said.

Mr. Duterte made the remarks after leading the wreath-laying ceremony at the Tomb of the Unknown Soldier at the heroes’ cemetery on Monday morning.

In a message released by Malacañang, the President appealed to Filipinos to emulate the country’s heroes, particularly their selflessness, patriotism and bravery.

“At a time when our unity as a people is constantly being tested, we take inspiration from their triumphs and struggles as we rise above the ills that plague our society and champion the empowerment of the poor, the marginalized and the oppressed,” he said.

In his speech on Monday, he lauded the heroism of countless Filipinos who faced “insurmountable odds” in defending the Philippines and its values.

“We are gathered here today not just to commemorate their sacrifices and remember their exploits, but more importantly, to emulate their selflessness and to live up to their example as we go about our daily lives,” he said.

The President stressed the importance of becoming “worthy heirs” to the legacy of the country’s heroes so that the present generation may leave a country that succeeding generations would be proud of.

As in last year’s celebration, Mr. Duterte paid tribute to the government troops who fought in the five-month battle for Marawi against local terrorists who had pledged allegiance to the Islamic State jihadi group in the Middle East.

He cited the country’s soldiers who “gallantly sacrificed their lives to defeat communist insurgents, Islamic separatists, and other threats to our sovereignty, especially those who took part in the successful liberation of Marawi from the clutches of terrorism and extremism.”

In his own National Heroes’ Day message, Interior Secretary Eduardo Año appealed to local governments and private employers to give jobs to dependents of soldiers and police officers killed in the line of duty.

“It’s the least that we can do in honor of our fallen heroes who sacrificed their own lives for our cause,” Año said.

The Department of the Interior and Local Government is the lead agency in the Comprehensive Social Benefits Program, which assists dependents of fallen soldiers and policemen.

As of July 31, the program has taken in 595 dependents, 343 of whom have been given employment.

The rest are either unemployed or undergoing training through programs of the Technical Education and Skills Development Authority.

The interior department has asked mayors to endorse them to employers in their municipalities.

At the heroes’ cemetery, the President also cited volunteers who were dedicating their time and resources to rebuild the war-torn city and restore its former glory.

Mr. Duterte also recognized the Philippine National Police and its intense campaign against crime and illegal drugs, and for keeping the country safer, a condition conducive to economic growth.

The police chief, Director General Oscar Albayalde, has his own National Heroes’ Day message to the public, in which he said that for the PNP, heroism meant upholding democracy, sovereignty and the rule of law.

National Heroes’ Day is an “opportune time to reaffirm our professional commitment to uphold the rule of law as servants and protectors of the people,” Albayalde said.

In his speech, Mr. Duterte also cited the teachers, who “made it possible for our youth to learn and understand what it takes to become heroes in their own right by contributing to our efforts in nation-building.”

The President likewise cited migrant Filipino workers for their sacrifices and hardships, leaving their families to work in other countries and improve their lives, and contributing to national development through their remittances.

“We honor not just those heroes whose statues proudly stand along hallways and pedestals, or whose portraits are embedded in our currency and history books. Instead, we honor our unnamed heroes who, in their own little ways, have made huge difference in the lives of those they have touched,” he added. —WITH A REPORT FROM JAYMEE T. GAMIL