Duterte: Emulate our heroes in fighting the ills of society 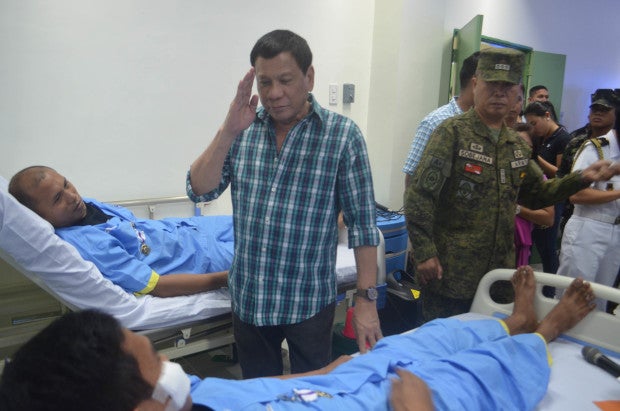 President Rodrigo Roa Duterte salutes a soldier who was wounded in a clash with Abu Sayyaf bandits in Sulu this week. PRESIDENTIAL PHOTO

President Rodrigo Duterte on Monday urged Filipinos to emulate the heroism of “those who have fought for our freedom” as the country continues to fight the “ills that plague our society.”

“We honor the patriotism and bravery of those who have fought for our freedom and laid the foundations upon which our nation proudly stands on,” Duterte said in his National Heroes Day message.

The President also paid homage to ordinary Filipinos who continue to contribute in nation-building.

“We also recognize the thousands of ordinary citizens — our everyday heroes, who continue to make sacrifices for the welfare of their families and the advancement of our communities,” he said.

“At a time when our unity as a people is constantly being tested, we take inspiration from their triumphs and struggles as we rise above the ills that plague our society and champion the empowerment of the poor, the marginalized and the oppressed,” he added.

“As we commemorate the valor of our heroes,” he said, “let us continue to emulate their selfless ways in our daily endeavors as we effect lasting change across the nation and create a legacy upon which future generations can build on.”

The President said the country honors “not those heroes whose statues proudly stand along hallways and pedestals, or whose portraits are embedded in our currency and history books but unnamed heroes who, in their own little ways, have made huge difference in the lives of those they have touched.”

“We honor our brave troops who gallantly sacrificed their lives to defeat communist insurgents, Islamic separatists, and other threats to our sovereignty, especially those who took part in the successful liberation of Marawi from the clutches of terrorism and extremism,” he said.

“We honor our volunteers who, despite the risks to their lives and safety, have dedicated their precious time and resources to [rebuild] and bring back the once thriving and prosperous city back to its former glory,” he added.

He also recognized “dedicated police officers who, through an intensified campaign against criminality and illegal drugs, have made our streets, neighborhoods, communities and [businesses] safer and more conducive for growth and development.”

“We honor our educators who, despite limited resources, have made it possible for our youth to learn and understand what it takes to become heroes in their own right by contributing to our efforts in nation-building,” he said.

“We honor our overseas Filipino workers who, while enduring the hardships of working away from their homeland, have contributed to our national development while providing the needs of their loved ones,” he added.

He urged Filipinos “to honor ordinary Filipinos who, despite the challenges that come their way, continue to work for the well-being [of] their families, the betterment of their communities, and the advancement of our nation. These are our everyday heroes that we need our youth to emulate and look up to.”

He said Filipinos should be “inspired to embody the ideals and values” of our heroes.

“Let us all become worthy heirs to their legacy so that we may leave behind to the succeeding generations of Filipinos a nation that they will also proudly give up their lives for,” he said. /cbb