Next CJ could be De Castro, Peralta or Bersamin; impeach raps nonfactor 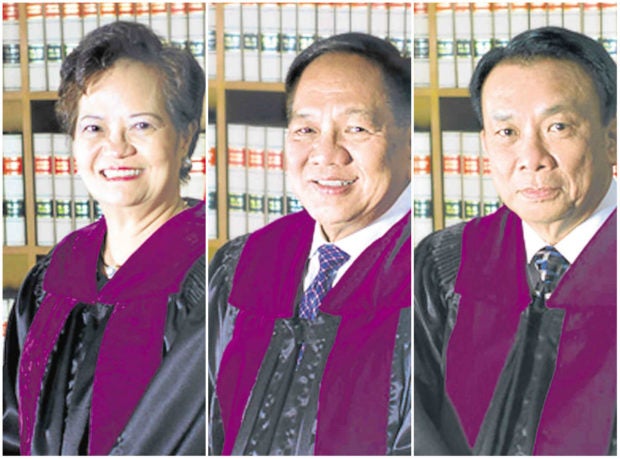 The JBC did not consider the impeachment complaints filed on Thursday against the three justices by several House opposition lawmakers, Guevarra said.

“Mere filing of the impeachment complaint [was] not enough to disqualify [them]. It is not yet considered an impeachment case until it is affirmatively acted upon by the appropriate House committee,” he said.

But for Albay Rep. Edcel Lagman, the JBC acted with “indecent alacrity” in proceeding to vote for the short list and should reopen the application for the Chief Justice post.

To say that the impeachment complaints have not yet matured to a pending case was “flawed because upon the filing of the complaints and before they are dismissed, the complaints are deemed pending just like unresolved criminal and administrative cases,” the Bicolano congressman said on Friday.

De Castro, Peralta and Bersamin—who were all appointed by then President and now Speaker Gloria Macapagal-Arroyo—are the high court’s second, third and fourth most senior associate justices, respectively.

All three will reach the mandatory retirement age of 70 within President Duterte’s term: De Castro in October this year, Bersamin in October next year and Peralta in March 2022.

Judge Virginia Tejano-Ang of Tagum City Regional Trial Court (RTC) was disqualified “because of an adverse finding and recommendation in her administrative case,” Guevarra said without giving details.

He said JBC members also took into consideration the “unwritten rule” that a judge should not apply for a position two levels higher than his or her current post.

For example, one cannot move up from being municipal trial court judge to Court of Appeals judge or from RTC judge to Chief Justice.

Meanwhile, Malacañang expressed confidence that the impeachment case against seven of the eight Supreme Court justices who voted for Sereno’s ouster would be junked for having “no merit.”

“After all, whether it be in form or substance, we have seen that the [quo warranto] decision was within the jurisdiction of the Supreme Court,” said presidential spokesperson Harry Roque, citing the 1987 Constitution.

For the First Division, headed by the Chief Justice, Peralta was designated acting chair, with Mariano del Castillo, Jardeleza and Tijam as regular members, and Gesmundo as acting member.

For the Third Division, De Castro was named chair with Justice Marvic Leonen, Bersamin and Gesmundo as regular members, and Andres Reyes Jr. as acting member. —WITH A REPORT FROM DJ YAP