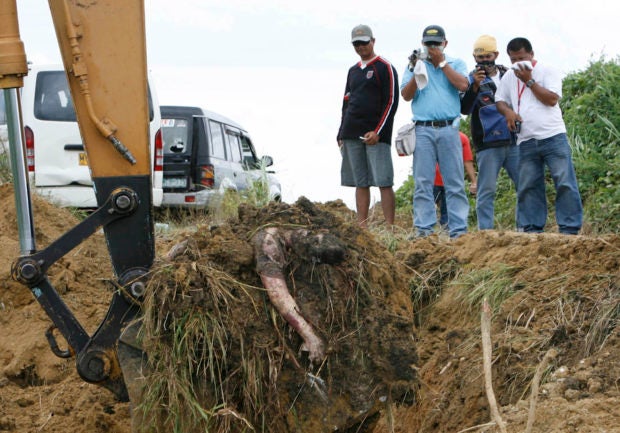 HILLTOP HORROR The body of one of the 58 victims of the Maguindanao massacre is recovered from a hastily dug mass grave in this Nov. 25, 2009, file photo. —INQUIRER FILE PHOTO

President Rodrigo Duterte has expressed hopes that “by this year, some of [the suspects] facing charges” in the 2009 Maguindanao massacre “will be sentenced so that the victims will at least feel that they have been given justice,” Presidential Spokesperson Harry Roque said.

Speaking on dzRH radio, Roque said the President remained sympathetic to the families of the 58 people, including at least 32 media workers, who were killed and whose bodies were later discovered in hastily dug mass graves.

“What is saddening is that although this is the situation up to now, some people have been acquitted [and] no decision has been made convicting anyone,” said Roque, who used to be a private prosecutor in the case.

The Palace official also reiterated Mr. Duterte’s dismay over a court decision allowing former Autonomous Region in Muslim Mindanao Gov. Zaldy Ampatuan, one of the primary suspects, to attend the wedding of his daughter on August 21.

“[Let me] assure everyone that the release of Zaldy was opposed by the prosecutors. Second, that provisional liberty through what they call a furlough is not acceptable. And third, [that the furlough] does not mean that the court was ready to acquit Zaldy,” Roque said.

“I believe that the decision will still be based on the evidence. We will make sure that justice prevails for victims of the Maguindanao massacre,” he said.

The families of the victims met with the President in Malacañang in November last year, Roque recalled.

On Nov. 23, 2009, Maguindanao Gov. Esmael Mangudadatu, then vice mayor of Buluan town, sent his wife, two sisters, lawyers and aides to file his certificate of candidacy for governor against Andal Ampatuan Jr., who was then mayor of Datu Unsay town.

But the group, which included media workers who had joined the convoy to cover the event, was waylaid allegedly by men of the powerful Ampatuan clan.

They were shot and buried in graves dug using a backhoe on a hilltop overlooking the highway.

In a press conference on Friday, Maguindanao Rep. Zajid “Dong” Mangudadatu said he would file a resolution asking the justice department to investigate the furlough granted to Ampatuan and another suspect.

“Our family expresses our deep pain and discomfort over the furlough granted by the court to Zaldy Ampatuan … [For] nine years until today, we [have been] enduring the indiscriminate assault of the Ampatuans on the dignity and memory of our dead families with the unabashed attitude of Zaldy Ampatuan [partying] at his daughter’s wedding,” Mangudadatu said in a statement.

The Maguidanao representative lost three sisters, an aunt, a cousin, a sister-in-law and several aides in the massacre.

He is the brother of Gov.  Mangudadatu, who lost his wife in the carnage.

Zajid Mangudadatu said he hoped the furlough would not be repeated. “While we believe that humanitarian reasons matter, we also believe that the nature of the charges does matter as well in considering a grant of leave,” he stressed.

He said there had been three instances when leave was granted the Ampatuans, with the Mangudadatus learning about it only this week after pictures of Tuesday’s wedding were posted on social media.

Another accused, Akmad Ampatuan, was granted furlough in March 2017 to attend his child’s wedding, while Zaldy was allowed to attend his daughter’s graduation in June this year, and then the wedding on Tuesday.

Mangudadatu said they were expecting a life sentence for the accused Ampatuans.