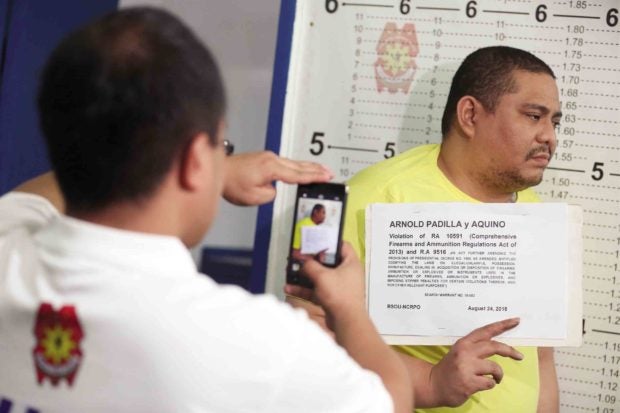 A man, who recently gained notoriety after he was caught on a video mauling a traffic enforcer flagging him for beating the red light, was arrested after policemen found alleged unlicensed firearms and grenades inside his residence at an exclusive village in Makati City on Friday.

A .45-caliber Glock 21 pistol, a Keltec 12 gauge 3-inch automatic shotgun and dozens of ammunition for both firearms were seized by members of the National Capital Region Police Office (NCRPO)-Regional Special Operations Unit after they raided the two adjacent houses of Arnold Padilla on San Antonio Street in Magallanes Village around 6 a.m.

Two Mk2 fragmentation grenades were also found inside the cabinet in one of the rooms occupied by one of his bodyguards, Alfie Ortiz.

NCRPO chief Director Guiller Eleazar said the Firearms and Explosives Office revoked Padilla’s license to own and permit firearm since April 24, after he submitted a fake drug test result in 2015.

He also cited “at least 30” complaints by his neighbors lodged at the barangay as basis for the search warrant.

Padilla, however, denied the allegations, saying the grenades were not his and were just “planted” by authorities.

“I am being persecuted by barangay officials. They have personal grudges against me,” he said.

Members of the barangay and homeowners association of Magallanes Village were present during the raid.

One of Padilla’s lawyers, Raymond Fortun, said the firearms that the police confiscated had proper licenses, while the other guns were owned by his client’s bodyguards.

Padilla and Ortiz were initially detained at the NCRPO headquarters in Camp Bagong Diwa, Taguig City, for illegal possession of firearms, ammunition and explosives.

Padilla was later transferred to St. Luke’s Medical Center after his blood pressure shot up to 160/90.

Last week, Padilla and his live-in partner, Glocel Razon, and their bodyguards were caught on video beating up a traffic enforcer, who had flagged them down for running a red light at an intersection of Magallenes Village Gate 1 and Edsa.

In a report by Makati police, Padilla spit and cursed at the enforcer, calling him “basura” (trash).

Razon and their bodyguards also  took turns attacking the enforcer, until he backed away.