At wake of 7 rebels, paintings of guerrilla life draw attention 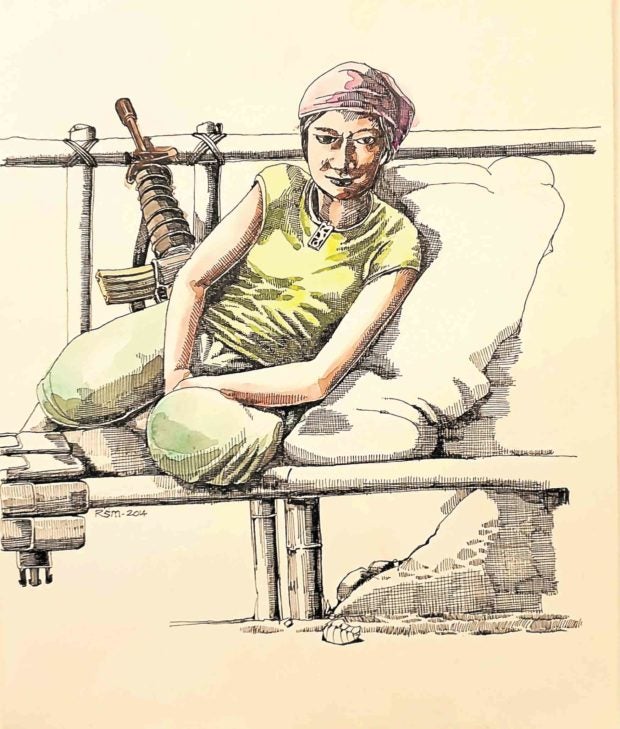 PORTRAIT OF A GUERILLA One of the paintings displayed at the wake of seven rebels in Iloilo City depicts a female guerrilla in a rebel camp. —CONTRIBUTED PHOTO

ILOILO CITY—Paintings drew the most attention at the wake for seven communist rebels at a funeral home here.

While CPP and NDFP leaders confirmed that the slain men and woman were rebels, they said those lying in the seven coffins were noncombatants and were unarmed when killed by soldiers.

The walls and hallways at the second floor of Gegato Abecia Funeral Homes and Crematory in the village of Balabago here turned into a gallery featuring at least 50 works of Felix Salditos, 60, and Eldie Labinghisa, 56.

They were among those killed at the village of Atabay in San Jose town, Antique province in a supposed clash with soldiers on August 15.

Police and military officials had described them as members of a rebel “extortion group” who were killed when they lobbed a grenade at a law enforcement team trying to serve arrest warrants for two of the men.

The slain men’s relatives, however, said they were victims of a massacre and were unarmed when policemen and soldiers came.

Concha Araneta, spokesperson for NDFP and CPP in Panay, said in a statement that those who died were noncombatants and members of the CPP’s regional education and propaganda staff.

On Tuesday, families, friends and colleagues of the slain rebels paid tribute to them with songs, poems, speeches and anecdotes.

They vowed to pursue the ideals that those who died fought for.

Ruth Salditos, widow of Felix, described her husband as a  prolific artist who drew inspiration for his works from the lives and struggles of farmers, workers and Tumandok, Panay’s biggest indigenous people’s group concentrated in the central areas of the island.

Salditos’ works had been exhibited in schools. He is more known by his artist and pen names RFS, Mayamor and Maya Daniel.

In the Facebook page of Maya Daniel, Salditos posted 17 poems and bid his friends “goodnight” at 11:55 p.m. on August 14.

Police and military officials said the operation against the rebels started around 12:10 a.m. on August 15.

The art works of Salditos and Labinghisa exhibited at the wake included paintings in watercolor, acrylic and mix media, pen and ink sketches and driftwood sculptures.

These mostly depicted rural life and those of rebels in the mountains and of epics of the Tumandok people.

The Commission on Human Rights (CHR) in Western Visayas is investigating whether the rebels were unarmed when killed.

A CHR team had started to gather information and evidence, according to lawyer Jonnie Dabuco, CHR Western Visayas investigator.

The seven rebels died of fatal gunshot wounds in the head and chest during the clash at a house in San Jose.

He said soldiers found records and lists of companies and individuals targeted by the rebels.

Dabuco, however, said the Army was also trying to determine “if there was excessive use of force and if there was any violation of international humanitarian laws.”