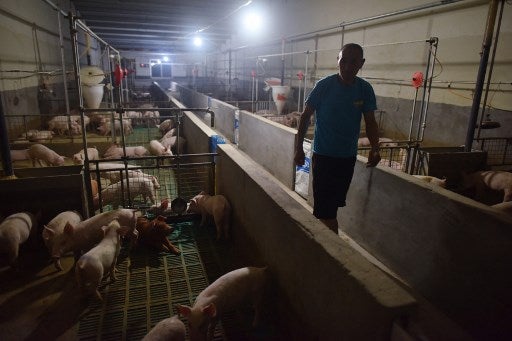 This photo taken on August 10, 2018 shows a worker walking past pens at a pig farm in Yiyang county, in China’s central Henan province. AFP

Twice a day, Chinese pig farmer Jia Tiechui’s workers flip levers to deliver plops of soybean-based feed to 18,000 hogs, whose appetite is getting costlier as the US trade war bites.

The price of the powdery grain mixture, which is one-fifth soy, has risen since China imposed 25-percent duties on US soybean imports last month, escalating a trade spat between the two economic giants.

With both sides bracing for more tit-for-tat levies due Thursday, fallout from Beijing’s retaliation highlights the tricky balancing act of firing back at Washington while not shooting its own economy in the foot.

China, the world’s biggest importer of soybeans — used mostly in cooking oil and animal feed— bought around a third of its beans from the United States last year.

So far, the impact of the trade clash “hasn’t been too drastic” at Jia’s farm, on the outskirts of Luoyang city in China’s pig-raising powerhouse province of Henan, he said.

But he may have to switch to a different feed formula with less soy if his profit margins continue to slim.
“Our formula can be changed, replacing soybean pulp with cotton seed or rapeseed pulp,” Jia said, inspecting rows of massive, pregnant sows squealing for supper.

“If costs keep going up and this doesn’t affect the pigs’ growth, we’ll definitely adjust it.”

Jia’s family of corn-growing farmers scraped and saved for years to buy two pigs to raise at home, which they fed by hand.

He could never have imagined then or even when he first entered the business in the late 90s that his pigsties would one day stretch as far as the eye can see.

“When the market is good, it doesn’t affect our income if feed is a bit more expensive. What we’re worried about is if the market worsens and pork prices don’t go up,” he explained.

An oversupply problem faces China’s pork industry, whose rapid expansion has made it the world’s biggest producer of the meat.

This means prices are likely to stay low enough to not dramatically affect consumers during a trade war, analysts say.

“There’s an incredible amount of pork in China; there’s no way we can eat it all,” said Feng Yonghui, chief researcher for trade portal Soozhu.com.

Pork prices tumbled to a four-year low earlier in 2018 before rising again from June, Feng said, but are now being hit by an outbreak of African swine fever that began this month.

Beijing’s soybean tariffs target US President Donald Trump’s rural base in the soy-growing American heartland.
Soybean pulp prices have increased 6.8 percent in China since the duties came into play, up from 3,018 yuan ($440) a tonne at the end of June to 3,223 yuan in August, according to online database Soybean Pulp Industry Net.

Experts say China should take steps such as quickly growing its own soy, promoting substitutes and sourcing more from other countries to reduce its massive dependence on the US product.

However, China cannot quit the US entirely as its annual demand for soy exceeds the world’s total capacity to meet it without US crops in the picture.

Beijing will buy more from Brazil and Argentina, but may also import US soy via third countries like Vietnam, said Feng.

The extra shipping costs would still be less than the tariffs, he said, predicting that ultimately soybean prices would not jump more than 30 percent.

For Jia, the vagaries of the trade war “aren’t something we pay attention to”, he laughed, shooing an escaped piglet back into its pen.

“It’s up to the government and out of our control.”

With his new automated feeding system, installed earlier this year, Jia needs only 20 men to watch over so many pigs.