North and South Koreans prepare to part for last time 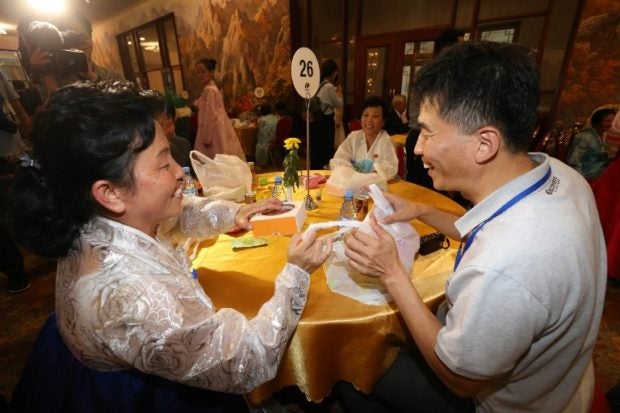 Elderly North and South Korean family members allowed to meet for the first time in nearly seven decades prepared to bid each other farewell Wednesday, in all probability for the last time in their lives.

Millions of people were swept apart by the 1950-53 Korean War, which left the peninsula split by the impenetrable Demilitarized Zone (DMZ) and separated brothers and sisters, parents and children and husbands and wives.

Over the years most have died, and fewer than 60,000 South Koreans remain alive who have registered to meet their Northern kin at the occasional reunions — this week’s are the first for three years.

Those survivors lucky enough to be chosen to take part — 89 families this time, with a similar number to follow later this week — have to cram a lifetime’s relationship into just three days.

When they come to an end, the realities of age and the nuclear-armed North’s isolation mean they are unlikely ever to see each other again.

At a morning reunion before the final farewells, South Korean Kim Byung-Oh, 88, started to sob as soon as his younger sister joined him at the table.

“Brother, don’t cry. Do not cry,” she said, squeezing his hands hard, but his tears kept flowing, before his sister — who had bitten her lips to try to stay calm — also broke down.

They squeezed each other’s hands, without saying a word, for nearly 10 minutes.

“I didn’t know my father would cry this much,” said Byung-oh’s son.

Hostilities ceased with an armistice rather than a peace treaty, leaving the two Koreas technically still at war and with all direct civilian exchanges — even mundane family news — banned.

Many drew family trees on pieces of paper and exchanged relatives’ names and photos, according to South Korean pool reports.

As South Korean Lee Soo-Nam, 77, sat with his eldest brother he abruptly asked his Northern nephew to write down all his siblings’ and children’s names.

“I asked for their names to remember them while I’m alive,” Lee said.

“Words fail to describe how I am feeling right now,” he went on. “When can we meet again? No one knows. It’s so sad. I wish we were younger.”

But he was “tremendously happy” they had been able to meet.

“Now I can go to the graves of my parents and tell them, ‘Father, mother, I met brother Jong Song and saw him alive. I thank you. It is all thanks to your prayers’.”

Others were grateful they had been able to see their relatives, however briefly.

South Korean Lee Byung-joo, 90, met a nephew and niece, the children of his late elder brother.

“Now, having met them, my lifelong sorrow is gone,” he said.

“All the questions I had have been answered. Now I can put down the burden in my heart. We have found our roots.”