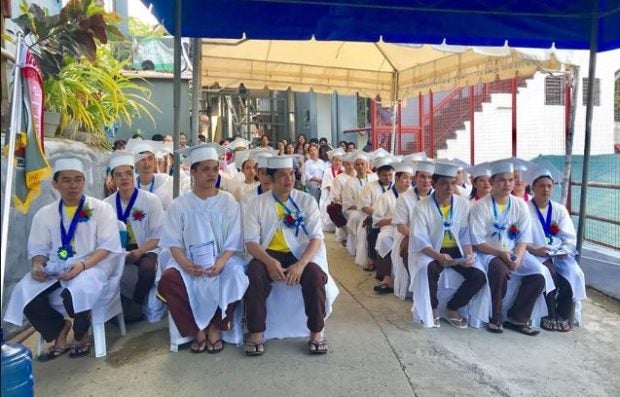 Inmates of the Consolacion Municipal Jail in Cebu were reduced to tears when they passed the accreditation tests of the Alternative Learning System (ALS) and graduated on Monday, Aug. 20.

In a Facebook video shared on the same day by Joannes Alegado, Consolacion municipal councilor, the inmates of the said jail can be seen wearing their white togas and caps during their graduation. Alegado was tasked to attend the graduation on his mother’s behalf, Consolacion mayor Teresa Alegado.

The inmates were captured tearfully singing their graduation song, “Pagsubok” by Aegis, in the video. The lead singer graduate can also be seen overcome with emotions, while other graduates in the crowd wiped their eyes with handkerchiefs.

“LABAN LANG (KEEP FIGHTING),” wrote Alegado last Aug. 20. “Congratulations to all the inmates who graduated/passed the accreditation and equivalency tests of our Alternative Learning System (ALS) inside the Consolacion Municipal Jail.”

Alegado’s video has since made the rounds on Facebook, amassing almost 500,000 views and 9,000 shares in just two days.

“There were 14 who graduated in Elementary and 29 in the Secondary Level,” Alegado told INQUIRER.net today, Aug. 22. “This is the second batch of ALS graduates among our inmates. The first graduation was held last year.”

Alegado, too attests to the inmates’ joy over their graduation.

“The atmosphere was really filled with emotions.” Alegado told INQUIRER.net. “Some inmates were tearfully overjoyed and can hardly sing the song ‘Pagsubok’ their graduation song. The lead singer who happens to be one of them was the first to shed his tears.”

The saying “while there is life, there is hope” couldn’t ring any truer. Many inmates have since gone through the Department of Education’s ALS since it was introduced in the country’s prison houses years ago. ALS aims to give a chance to Filipinos who were unable to attend and finish formal basic education due to various factors and reasons, giving them access to basic education that fits their unique situations and needs.

ALS, too, has given thousands of Filipinos in jails the chance to turn their lives around: to redeem themselves and change for the better, and to look forward to a new life upon release and reintegration — a life that would let them become reformed and productive members of Philippine society as the humans they are.

“We who were seated in front were so moved by what we were witnessing, our eyes welled in tears,” Alegado further told INQUIRER.net. “You can sense that the graduates had this hope inside them and was filled with anticipation for a brighter and better future. And not seen in the video were parents tearful as well.” JB

Read Next
North and South Koreans prepare to part for last time
EDITORS' PICK
Nestlé Philippines’ ‘NESCAFÉ Plan’ bags Grand Anvil at PRSP 56th Anvil Awards
Smart reinforces superiority with best speed and mobile video experience in PH
Every Filipino home can now be a smart home with realme TechLife
New 3,045 COVID-19 cases push PH total active cases to 40,074
LTO’s P500-M deal for screws draws scrutiny
How to lose a PH genius: Wesley So officially a US citizen
MOST READ
US lays out list of aid to ‘satisfy’ Duterte following VFA payment demand
How to lose a Filipino genius: Wesley So officially a US citizen
Robredo on Sara Duterte leading poll surveys: Why are Filipinos drawn to leadership of this kind?
So: I lacked connections to succeed in PH ‘culture’
Don't miss out on the latest news and information.