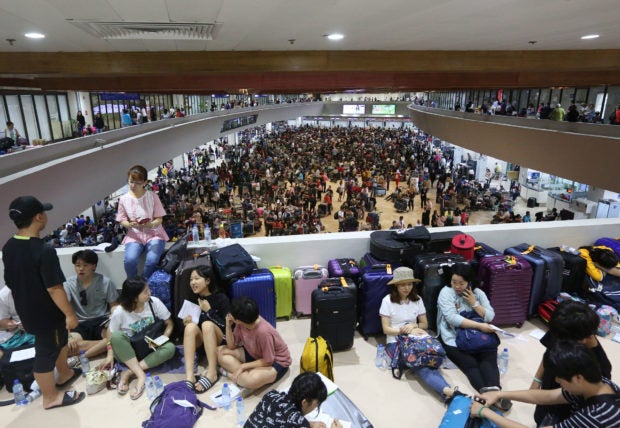 STRANDED Passengers wait for their flights at Ninoy Aquino International Airport Terminal 1. More than 260 flights have been canceled since Thursday night when a Xiamen Air Boeing plane veered off the runway. —MARIANNE BERMUDEZ

At least 69 flights at Ninoy Aquino International Airport (Naia) were canceled on Sunday, bringing misery to at least 13,000 passengers more than a day after a Xiamen Air Boeing 737-800 was lifted from a muddy field off the runway.

The canceled local and international flights were in addition to the more than 200 flights scrapped on Friday and Saturday, as airlines tried to normalize operations.

The airlines were reeling from disrupted schedules due to the Xiamen aircraft getting stuck in a quagmire on Thursday night.

Among the flights canceled was the one Davao City Mayor Sara Duterte was to have taken to Legazpi City, the Inquirer learned.

The cancellation of her flight prompted the postponement of the launching of her Hugpong ng Pagbabago political party at Legazpi City Convention Center on Sunday.

Another passenger affected by the cancellation of flights was a physician, who attended the birthday celebration for her father in Legazpi on Saturday.

Dr. Menchie L. Sarmiento decided to proceed to the bus terminal on Sunday shortly after an airline told her and other passengers that their 6:20 a.m. flight to Manila had been canceled.

A ticket attendant at Bicol Isarog Liner was surprised to find some 12 passengers who came from the airport queuing to book a trip to Manila, she said.

“I pity a female passenger, scheduled to leave for Singapore on Sunday night, who was not able to buy a bus ticket for the morning trip to Manila,” the physician said.

Others were in more dire straits, especially those stuck in Naia since Saturday.

Michail Lascano, 20, was supposed to leave on a Jetstar flight to Singapore with her family at 9:45 p.m. on Saturday. She was still stuck at Terminal 1 on Sunday afternoon.

“By 2 a.m. they told us to transfer … By 5 a.m., the pilot announced that because of the traffic situation, flying to Singapore would be impossible and that we would have to wait at least 13 hours before anymore announcements,” she added.

Lascano, who was traveling with her mother and two younger brothers, did not get her first meal from the airline until 3 p.m.—nearly 18 hours after they had arrived at Naia.

She said the conditions at Terminal 1 had improved slightly since the night before, when “80 percent of the floor was filled with people sitting and sleeping.”

Naia struggled on Sunday to regain a sense of normality, with airlines scrambling to mount recovery flights and airport officials attempting to navigate an “abnormal and unpredictable” situation, all the while scores of passengers remained stranded.

Ed Monreal, Manila International Airport Authority (MIAA) general manager, said that since the reopening of the runway at 11:30 a.m. on Saturday, 681 flights, or roughly 136,200 passengers, had flown in and out of the country’s premiere gateway.

One of those who were able to fly back to Manila on Sunday was businessman Fernando Alido.

Alido, who went to Cebu with his family and office staff for a convention on Aug. 13, had to spend 20 hours at Mactan-Cebu International Airport.

“The handling of the situation by the airline and airport was unsatisfactory,” Alido said upon his arrival in Manila on Sunday afternoon.

Alido’s staff was able to take off on Friday after the Xiamen plane was removed from the field, but he and his family were booked on a flight that was supposed to leave at 4:55 p.m. on Saturday.

Alido, his wife and young son were only able to leave Cebu at 12:32 p.m. on Sunday after signing a quit-claim in exchange for P3,000 and three one-way tickets to any local destination.

Speaking to reporters on Sunday, Monreal said Naia Terminals 2, 3 and 4 were “going back to normal,” while congestion at Terminal 1 had significantly eased.

In the rush to transport increasingly restless passengers out of Naia, however, Xiamen Air ended up giving airport officials another headache when it brought in four recovery flights on Saturday without coordinating with the MIAA.

Monreal said the airline had not asked for clearance for the four new flights, which again disrupted operations because of the domino effect it had on limited parking slots, equipment and gate assignments.

At least 35 flights, mostly from international destinations, were diverted to Clark International Airport in Pampanga province on Friday and Saturday.

More than 8,000 passengers disembarked and were bused to Manila.

As expected, the Senate and the House of Representatives will conduct inquiries into the Naia snafu.

Sen. Grace Poe, chair of the Senate public services panel, said she would seek an explanation from airport authorities about the “paralysis of the country’s main gateway” as the removal of the stalled passenger jet stretched for two days.