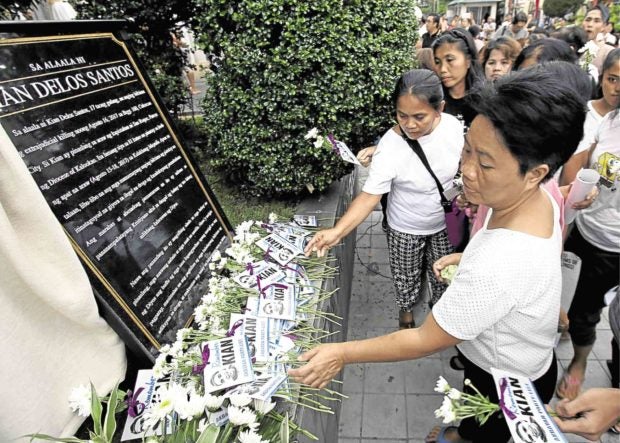 Teenage victim Kian Loyd delos Santos’ last cry for help should serve as a constant call for justice on behalf of all victims of human rights abuses in the government’s war on drugs, the Commission on Human Rights (CHR) said on Friday.

“The call for expedient justice rings louder not only for him but for all the minors and youth whose lives and dreams were snuffed out in the campaign against illegal drugs,” she said.

She cited the results of an investigation by a CHR team which found out that contrary to police claims, Delos Santos, a 17-year old Grade 11 student, was actually pleading for mercy as he was picked up by policemen from his house in Caloocan City on Aug. 16 last year.

“Please stop it, sir. I have an exam tomorrow,” he was reported as telling his captors, as quoted from a CHR investigation report.

De Guia expressed disgust that Delos Santos was killed by “police officers who [were] supposed to be the protectors of the people.”

“We owe it to the youth, especially to the innocent lives lost in the anti-drug operations, to fight for a society free of violence and abuse and one that truly upholds the dignity and rights of all,” she said.

While criminal and administrative cases had been filed against three police officers, others were not held to account. “Worse, [they were even] promoted,” she said.

De Guia called on the PNP leadership to ensure that they would bring to the fold of justice law enforcers who were involved in drug-related killings.