The journey of Vietnam’s smallest student 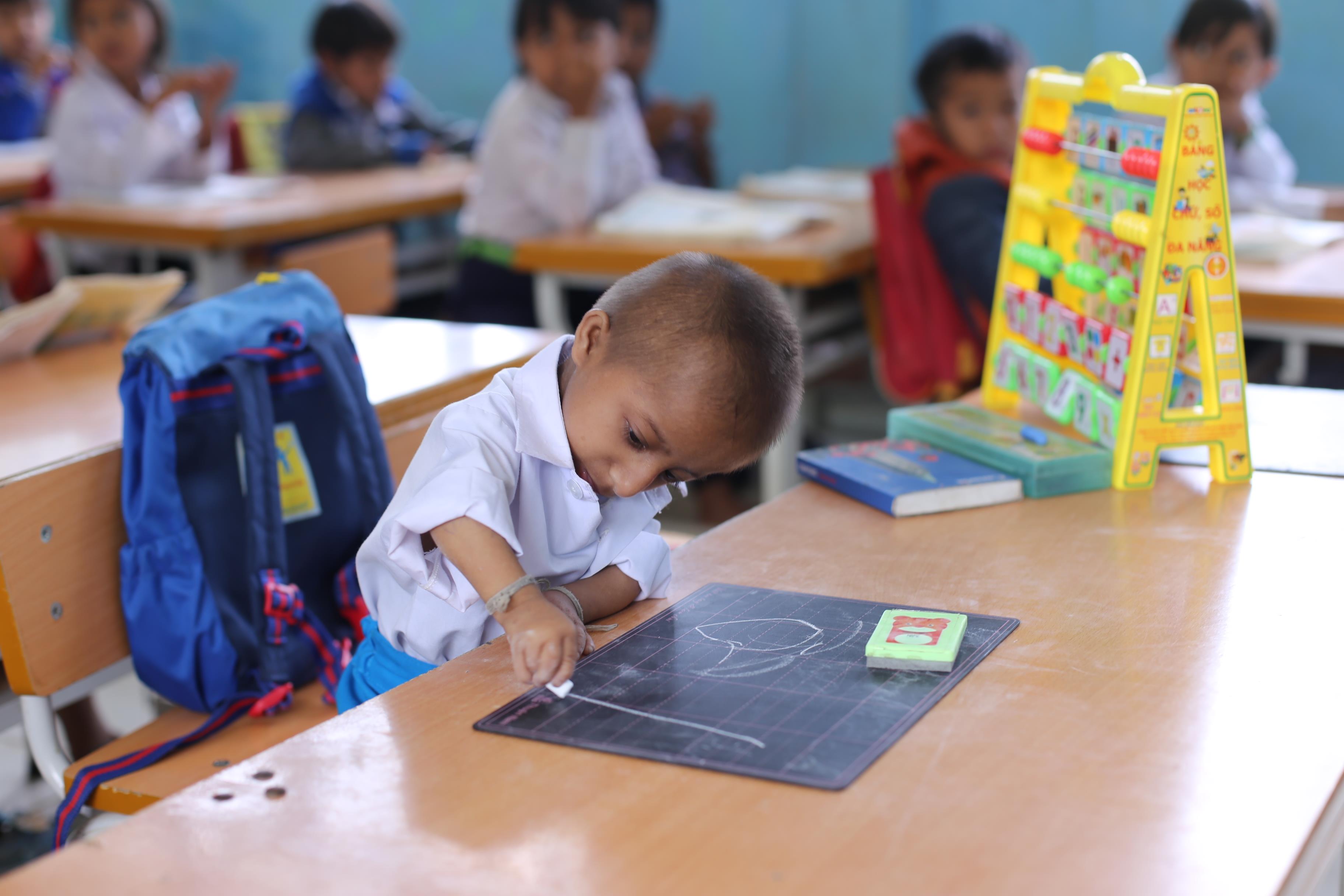 QUANG NGAI — It’s 6am. As usual, Dang Van Cuong, the head teacher of the Son Ba Primary Boarding School – a small school in remote Son Ha District in the central province of Quang Ngai – wakes up and begins his day. His first job of the day is not answering telephone calls or enjoying breakfast, but waking his student Dinh Van K’Re to attend morning classes.

The small boy, still sleepy, rolls back and forth on the bed. The teacher gently carries him in his arms to wash his face before having breakfast and getting dressed.

“You must be quick or else you will be punished by the teacher for being late,” he told K’Re.

The boy responds to his teacher’s warning and rushes to class. Though he lives just ten meters away, only after seeing K’Re enter the classroom can teacher Cuong put his mind at rest.

Seeing K’Re struggling to reach his seat, a classmate offers help, lifting him onto his chair, just minutes before the teacher enters the room. Giving his friends a big smile as thanks, the pint-sized boy folds his arms to salute his teacher like the other students.

K’Re should be considered an elder brother of class 1B because he has been studying grade one for three years. But to other students, he has always been their younger brother. Even though he is 10 years old, K’Re weighs just 3.9kg and stands 60cm tall. He suffers from Seckel syndrome, a genetic disorder characterized by growth retardation and microcephaly, or a small head. Only around ten cases of the syndrome have been recorded worldwide.

K’Re is the son of 30-year-old Dinh Van An and 28-year-old Dinh Thi Pia, living in Go Da Village. An and Pia are close relatives and married in 2006. Their first son, Dinh Van Sieng, K’Re’s elder brother, was born healthy one year later.

Pia gave birth to her second son, K’Re, after eight months of pregnancy in 2009. At birth, K’Re weighed just 600g and was the length of a hand. They thought his small size was due to being born prematurely. However, at the age of 7, K’Re weighed 3kg and measured 50cm in height. He was unable to speak or walk normally.

Due to his strange appearance, the villagers spread rumors that he was possessed by the devil and prevented other children from playing with him. Since then, K’Re played alone or slept in his parents’ baby sling when they worked on the farm. 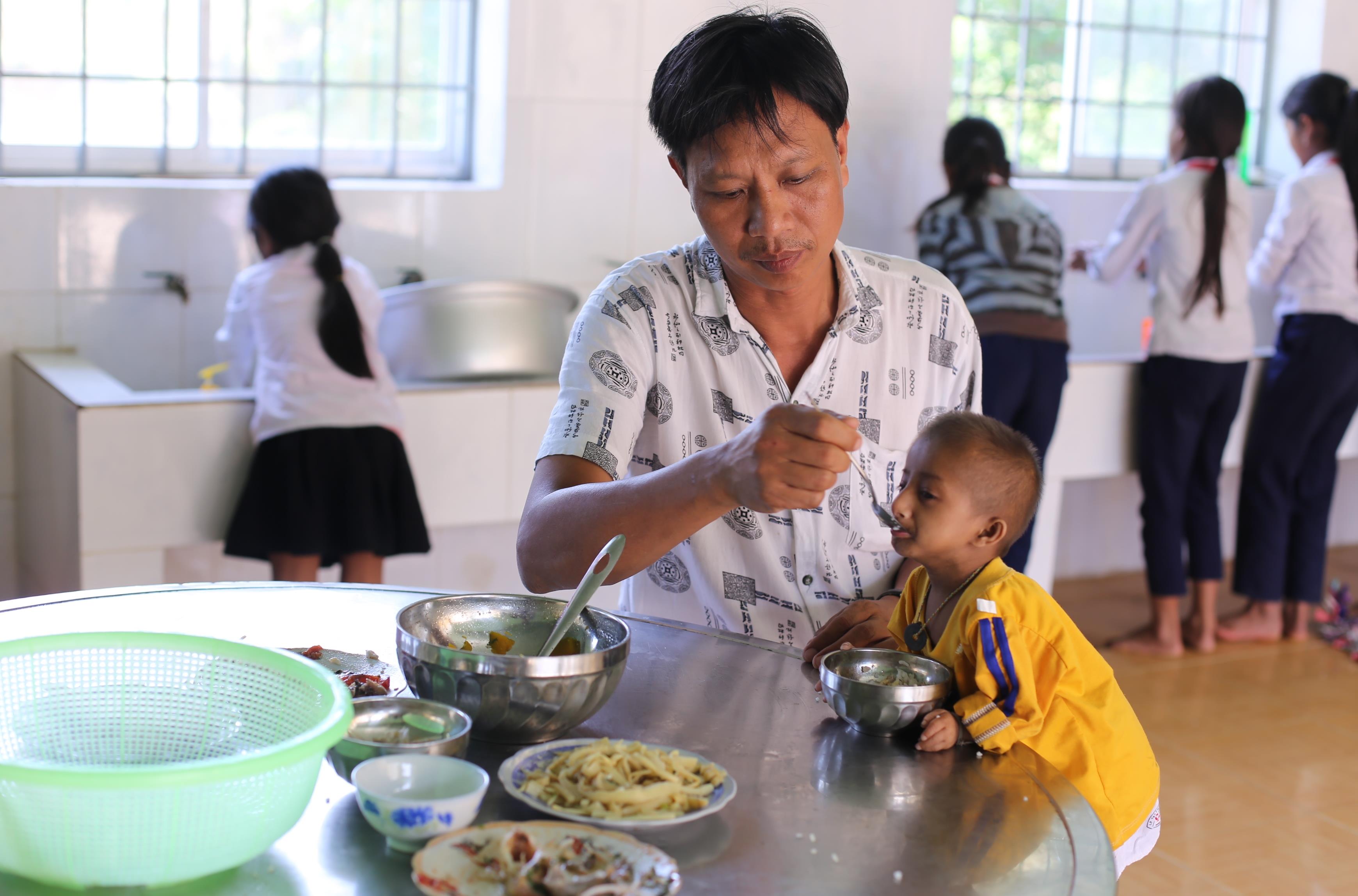 In 2013, during one of his trips to the village, teacher Cuong met K’Re by chance when his father was taking him to work. Moved by his tiny appearance, he encouraged the parents to raise him and promised to enroll him at school when he was old enough.

Keeping his word, two years later, when K’Re was seven, Cuong travelled over three kilometres through the forest to persuade his parents to let him go to school.

“Our son was too small, so we were afraid that he could not integrate with other pupils. However, teacher Cuong convinced us so we took the risk to let him go,” K’Re’s father, An, said.

During the first days living far from home, K’Re was shy and afraid of everything. He had to learn everything from scratch, including personal hygiene.

To help him get used to the new environment, Cuong patiently spent time taking care and instructing him in the smallest things. He has also moved his office to the pupils’ accommodation so he could better look after the boy.

The condition affects K’Re’s speech and memory, therefore teachers focus on life skills instead of academic knowledge, making him more confident. After three years, he has integrated well with other classmates and made many improvements. From a shy boy, he has become happy, agile and more courageous, being able to write numbers on the blackboard and do some personal activities.

More importantly, instead of being passive, K’Re has actively observed, listened and understood his surroundings, and therefore expressed his own opinions on being bullied or respond to the teacher’s questions.

“Despite his short attention span and mischievousness, K’Re’s attends all the classes,” said teacher of Class 1B, Pham Thi Khanh. “He is very good at giving signs and understanding what others say. Now he has been able to feed himself, put on his own shoes and climb to his place in class.”

Cuong has also taken the little boy to his home every weekend as a member of his family.

“I consider him my own child. My wife and children also consider him a part of the family. Though he can’t speak, he is very active and full of affection. My biggest wish and also that of other teachers is to provide him with life skills to integrate with other friends,” the head teacher said, boasting that K’Re had gained nearly 100 grams in weight.

On top of giving hope to K’Re, Cuong has also sponsored many other H’Re ethnic children in this mountainous area. Seeing their difficult journey through the forest to school, Cuong and other teachers travelled to each family and persuaded them to allow their children to attend their boarding school in 2009.

To prepare the accommodation for the students, they had to rearrange three rooms which used to serve as teachers’ rooms while the money for meals was extracted from their small salary.

“I encouraged everyone to take care of the pupils’ life by all means. If we had given up, we would have lost the parents’ trust, and it also means that they would have left the school for good,” Cuong recalled.

To improve the students’ quality of life, the head teacher continued to cross the forest to ask for financial support from the local authorities as well as rice and food donations from other benefactors.

From the initial 15, the number of pupils at the Son Ba Primary Boarding School has increased to 117. Since 2013, the school has received state support.

“Thanks to the care of the state, my dream of having enough classrooms has been realized. Recently, my school sold a pig we raised for VND12 million (US$515), which will be saved in case any pupils are taken ill,” Cuong said.