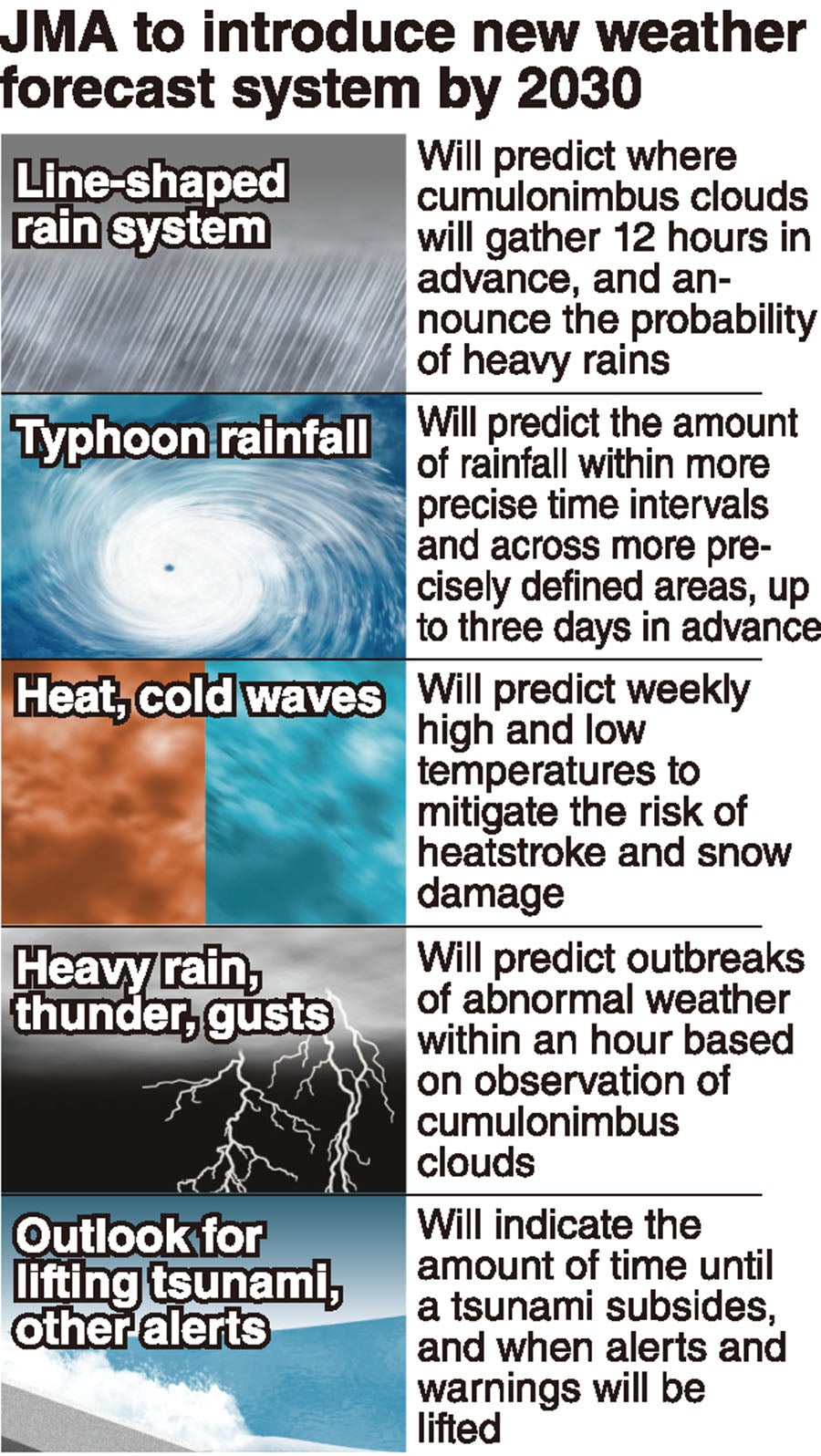 TOKYO — The Japan Meteorological Agency plans to launch a new weather forecast system by 2030 in response to the frequent occurrence of heavy rain and other natural disasters, according to sources. The new system will predict the occurrence of line-shaped rain systems that produce heavy downpours half a day in advance, as well as heat and cold waves and other weather events.

The JMA will also aim to predict total rainfall during typhoons across a three-day period, with plans to begin such forecasts three years from now, the sources said. The agency will use a supercomputer to improve the accuracy of its data analyses. It hopes to announce sudden changes in weather to affected residents as soon as possible so they have adequate time to evacuate.

According to the JMA, line-shaped rain systems — in which a band of cumulonimbus clouds produces heavy rains — has caused enormous damage in various parts of the country in recent years. In addition to last month’s heavy rains in western Japan, the phenomenon was responsible for downpours that battered northern Kyushu in 2017 and the Kanto and Tohoku regions in 2015.

However, line-shaped rain systems have thus far been impossible to predict, as they occur suddenly when warm air flows in, among other factors.

In June, the JMA introduced a new supercomputer that will enable detailed analysis of such data as amounts of water vapor, amounts of rainfall and wind strength. The data will be obtained from weather satellites and the Automated Meteorological Data Acquisition System.

In addition to the improved data analysis, the JMA will develop a new analysis program and begin using observational data from private companies, among other measures. Through these steps, it aims to predict the occurrence of line-shaped rain systems and announce the probability of heavy rainfall.

As evacuation would be difficult if a line-shaped rain system occurs at night, the JMA will announce the probability of heavy rainfall 12 hours in advance on its website as part of the new forecast system. Color-coded risk levels of landslides and floods will also be announced on the website.

In addition, the JMA will release weekly forecasts of heat and cold waves for the coming month, and begin issuing “severe storm alerts” that predict outbreaks of thunder and gusts within the hour.

While the JMA currently predicts only the strength and trajectory of typhoons, it will begin predicting the amount of rainfall across five-kilometer-square areas when it launches its new system.

Initially, the agency will aim to predict total rainfall per area across three-day periods, and hopes to begin such predictions three years from now. Later on, it hopes to predict the amount of rainfall over periods of several hours. The forecasts will also help predict water levels of rivers, which will allow affected residents to speedily evacuate.

Improving the accuracy of weather forecasts was a topic of discussion at a meeting on Aug. 1 of the weather subcommittee of the Council for Transport Policy at the Land, Infrastructure, Transport and Tourism Ministry.

The JMA aims to implement the new weather forecast system by 2030, and will consider proposals made by the subcommittee.

“We have a much better ability to analyze past events and current weather conditions, and to forecast future weather. We want to provide new information as early as possible,” a JMA official said.

Read Next
Flight schedules back to normal after Naia runway reopening
EDITORS' PICK
Hidilyn Diaz wins weightlifting gold in Tokyo Olympics
Tips for a cheerful life
‘I believe’: Hidilyn Diaz bucks the odds to win historic Olympic gold
Connect to PH’s fastest network with new Signature Plan Lite at only P599 per month
Harnessing technology for quality education
Golden girl Hidilyn Diaz ‘nervous’ but never in doubt during Olympics performance
MOST READ
Hidilyn Diaz wins weightlifting gold in Tokyo Olympics
Go to war with China over West PH Sea? It will be a ‘massacre’, says Duterte
Hidilyn shoots not only for gold but also for permanent place in PH sports history
Hidilyn Diaz overcomes struggles to make history for PH with gold medal
Don't miss out on the latest news and information.