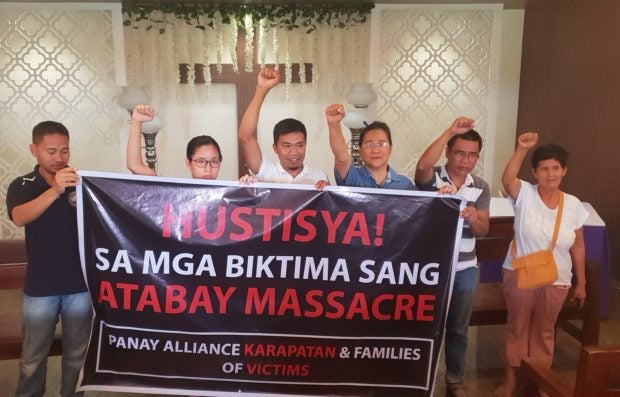 The family of seven suspected NPA rebels killed in San Jose, Antique on Wednesday accused soldiers and policemen of summarily killing their loved ones claiming that those killed were unarmed (Photo by Nestor P. Burgos Jr./INQUIRER VISAYAS)

ILOILO CITY – Liezl Bandiola’s face was half blown off. Five others had fatal wounds in the head or face.

“There was no firefight. They were mercilessly killed, massacred,” said Ruth Salditos, wife of Felix Salditos, one of the seven alleged New People’s Army (NPA) rebels killed in a purported shootout with policemen and soldiers in the capital town of San Jose in Antique province on Wednesday.

In a press conference at the Gegato Abecia Funeral Homes and Crematory in Jaro District here on Thursday afternoon, the families of the slain alleged rebels accused the Philippine National Police and the Army’s 301st Brigade of shooting and killing their loved ones who were “unarmed and probably sleeping.”

“Why were they so cruel? They could have arrested them,” said Lina Mecinas, wife of Peter Mecinas, 60, who was earlier identified as Rene Agustin.

Police and military officials earlier said the seven died after they threw a grenade and fired at a team of policemen and soldiers who were out to serve warrants of arrest against two alleged rebels about 12:10 a.m. on Wednesday.

They said a 30-minute firefight erupted before the alleged rebels were found dead inside a house in Barangay Atabay in San Jose. No one from the raiding team were hurt.

“We are ready to be investigated. There was no massacre,” stressing that a “legitimate encounter” happened.

The raiding them had presented various firearms, grenades and ammunition allegedly recovered from the house along with rebel documents and belongings.

Bulalacao said none of the raiding team were wounded because they were “well-positioned and were in superior numbers” compared to the alleged rebels.

But Reylan Vergara, secretary general of the human rights group Karapatan in Panay, said the recovered firearms were “rusty” and the ammunition was incompatible with the firearms.

Vergara said, “all indications point out that there was no firefight.”

“Whether they were NPA rebels or civilians, they have rights that should have been respected,” he said in the press conference before an autopsy on the cadavers was conducted.

Salditos said her husband was a prolific visual artist and poet whose works were exhibited in galleries. His body of paintings on the indigenous people’s group Tumandok in Panay was featured in the INQUIRER in 2009.

Lina Mecinas said her husband Peter came from a “landlord” family in Antique but chose to help farmers without pay.

“He can live comfortably without working but he chose to devote his time to help the poor,” she said.

Eliza Bandiola, the mother of Liezel, said her daughter was good-natured and helpful. This was also how Richie Cagampang describes her sister Karen.