‘Sometimes I wake up and still feel Kian’s embrace’ 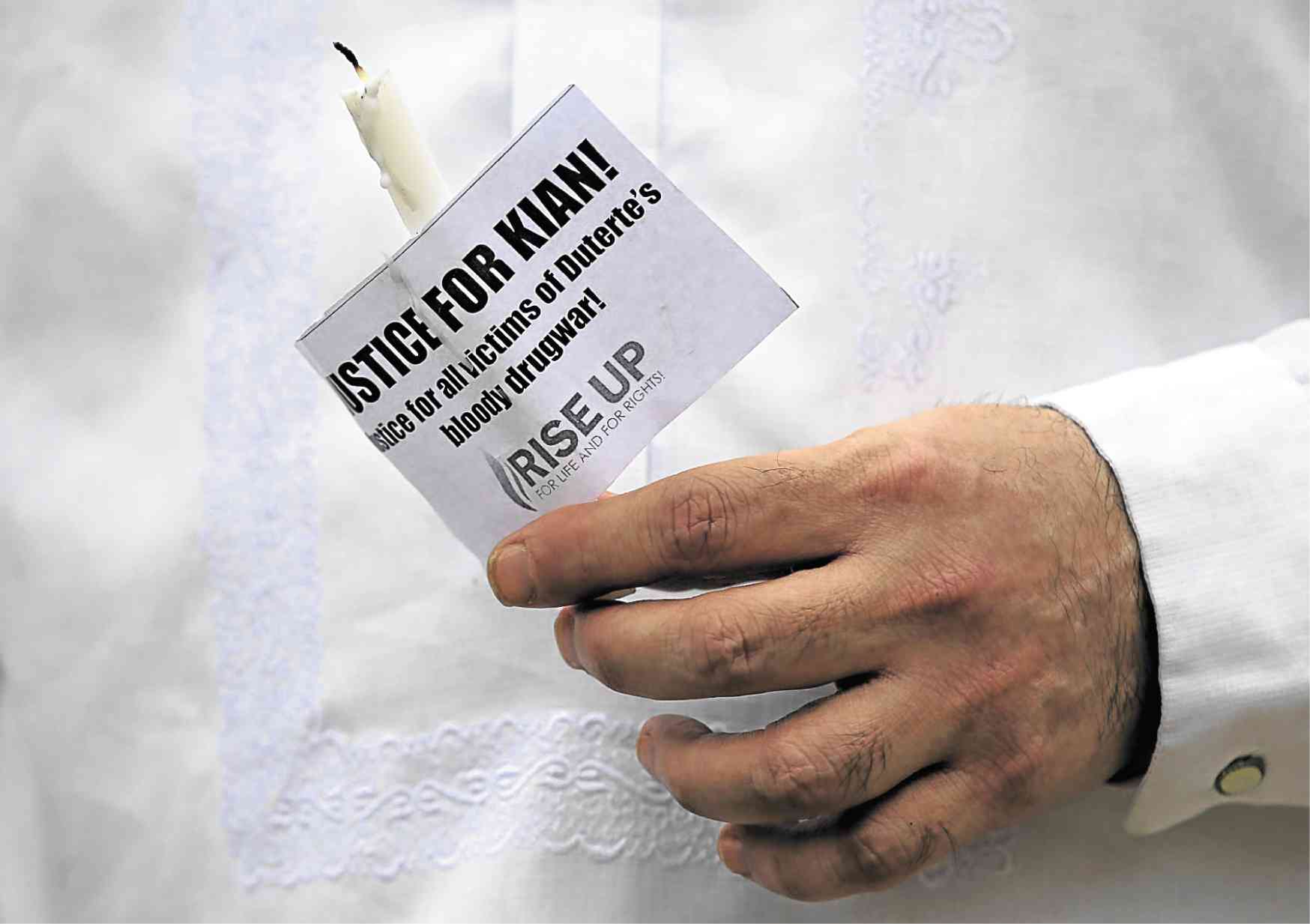 CHR head Chito Gascon holding a candle at the basketball court where EJK victim Kian delos Santos was dragged through before being brought to a corner wall and shot to death by police officers in Barangay 160, Caloocan City. A mass was held earlier in nearby Libis Baesa church in observance of his first death anniversary. INQUIRER PHOTO/LYN RILLON

While the death of 17-year-old Kian Loyd delos Santos in the hands of Caloocan City policemen last year made the public take a closer look at President Duterte’s drug war, there must be a sustained effort to prosecute those behind extrajudicial killings, his family and friends said on Thursday as they marked his first death anniversary.

“Kian may have started it all, but our calls for justice should not end with him,” said Fr. George Cavelo, who celebrated mass at Libis Baesa parish—a few blocks away from where the Grade 12 student was shot dead by policemen conducting a “One-Time, Big-Time” operation on Aug. 16, 2017.

“He wasn’t the first to be killed; he hasn’t been the last. We must not forget the others who have also fallen to the campaign, and we must be more vigilant in demanding accountability from our police,” he added.

They demanded accountability and justice for the teenager’s death as they lit candles and prayed at the spot where he was killed—a deadend alley near a pigsty.

“We’re OK now, but it’s moments like these that open up the wounds again. Sometimes we wish it would end,” said Delos Santos’ older sister, Krizzhia.

“It still feels like it happened only yesterday,” his grandmother, Violeta, said. “Sometimes I wake up and I still feel him embracing me and then I remember he’s gone.”

In an open letter to the attendees, Saldy and Lorenza, Kian’s parents, apologized for not being present as they reminisced about “the harder, yet happier times” when their son was still alive.

“You all know Kian that’s why your anger over his death is just like ours. We sorely miss Libis Baesa… Maybe that’s why our place became sad; Kian’s death cast a pall over our town,” said the couple, who are currently under the Department of Justice’s witness protection program.

Three police officers—PO3 Arnel Oares, PO1 Jeremias Pereda and Jerwin Cruz—are on trial for murder over the teenager’s death. In a hearing on Thursday, Judge Rodolfo Azucena of Caloocan Regional Trial Court Branch 125 said the trial could already wrap up in September should the defense finish its presentation early.

Family yet to move on

Saldy, who attended the hearing, said they were hoping that the case would reach its conclusion soon. Lorenza, he said, was still recovering after undergoing surgery for a benign cyst.

“We’re mostly OK now, but we miss our lives [before],” he said. “Once this is all over, Elsa will return to Riyadh and maybe I will go to Aklan to be a farmer. I think I just want to get away for a while.”

The day before, Krizzhia told the Inquirer that although it had been almost a year since Kian’s death, she was still waiting for her brother to come home. “Is that even possible?” she asked, smiling as she wiped away tears.

On Wednesday, Akbayan held a 30-minute program in Delos Santos’ memory. In the alley where her brother was killed, Krizzhia, together with her family and a few friends, lighted candles, laid a wreath, and prayed for him.

According to Wilson Requez of Akbayan Metro Manila, it was  important to remember Delos Santos’ death because it made more people aware of the issue of extrajudicial killings.

In a resolution, Sen. Risa Hontiveros proposed that Delos Santos’s death anniversary be commemorated yearly as a day to “remember the innocents” killed in the Duterte administration’s brutal war on drugs.

“By choosing to remember those who have been felled by the War on Drugs, we state our clear rejection of this culture of impunity and brazen disregard for due process and human rights,” Hontiveros said. “The act of remembering is an act of defiance against the killings. To forget is to give consent.” — WITH A REPORT FROM LEILA B. SALAVERRIA