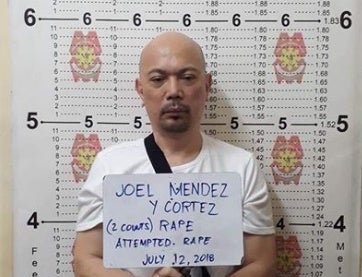 Celebrity doctor Joel Mendez refused to enter a plea during his arraignment for rape and attempted rape at the Mandaluyong City Regional Trial Court (RTC) on Wednesday, prompting the judge to enter a plea of “not guilty” in his behalf.

Mendez, who was arrested on July 12 and was out on bail that same day, reiterated his intention to seek a reinvestigation of the charge that he abused a 17-year-old woman inside his clinic in 2015.

The cosmetic surgeon also filed a motion asking Judge Imelda Portes-Saulog of RTC Branch 214 to inhibit herself from the case, citing the bias she supposedly showed when she earlier denied his motion to reopen the investigation.

Present during the arraignment was the complainant—now 20 years old—and her mother. According to the complainant, the abuses happened a month after the Mendez Medical Group tapped her as an endorser.

According to case records, in September 2015, she and her mother went to Mendez’s clinic in Mandaluyong to hand him an invitation to her debut party.

The doctor allegedly made sexual advances on the teenager after her mother excused herself and left the clinic to briefly attend to matters in preparation for the party. When the mother returned, she found her daughter in a state of shock.

A day before his arraignment, Mendez filed a motion for inhibition and sought the suspension of proceedings until the case was reraffled to another court.

He claimed he was denied his right to due process, blaming the “gross negligence and mistakes” of his former lawyer during the preliminary investigation. He said he did not authorize his counsel to waive his right to file a counteraffidavit.

But Prosecutor Christopher Ortiz maintained that the denial of the motion was done without any irregularity and that the case underwent regular preliminary investigation, with Mendez was duly represented. —WITH A REPORT FROM CEDRIX PEREZ