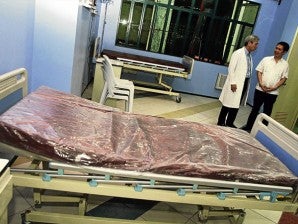 Will it be the hospital room previously occupied by suspected mass murderer Andal Ampatuan Sr. or the Joseph Estrada suite?

Where former President Gloria Macapagal-Arroyo will be detained while she is facing charges of electoral sabotage is being mulled by her jailor, Judge Jesus Mupas of the Pasay City Regional Trial Court (RTC).

Mupas issued the warrant of arrest against Arroyo, now a Pampanga representative, on November 18 hours after finding probable cause in the criminal complaint filed by the Commission on Elections.

On Monday, Mupas visited three Quezon City hospitals run by the government and the detention quarters at the Southern Police District in Taguig City, but kept mum on where Arroyo will be finally incarcerated while she undergoes trial for allegedly rigging results of the 2007 senatorial elections in Maguindanao.

At the Armed Forces of the Philippines Medical Center, Mupas inspected the room where Ampatuan, accused mastermind of the November 2009 massacre of 57 people, was confined for three days following his arrest.

Mupas arrived there at 1:30 p.m. and, according to an AFP hospital staff member, took about 10 minutes to complete his inspection of the second floor room. He did not ask to be shown the best room in the hospital, which is reserved for the defense secretary and VIP guests. The room is spacious and is the only room that has a receiving area.

The judge later proceeded to Veterans’ Memorial Medical Center, also in Quezon  City, at 2 p.m. He reportedly stayed for 20 minutes as he inspected the presidential suite where former President Joseph Estrada, ousted in January 2001, served his hospital arrest, asking questions on medical staff and facilities.

“Of course we also have to consider that she is a former President,” said RTC Clerk  of Court Joel Pelicano, who accompanied Mupas. “We have for guidance the experience with former President Joseph Estrada,” he told reporters.

Another stop was at Philippine Orthopedic Center, where a room said to be fit for Arroyo, who is under treatment for a rare bone ailment, featured air-conditioning and a toilet and bath.

During the visit at the Southern Police District headquarters at 11:30 a.m., the judge was shown by Senior Superintendent James Bucayu, deputy director and officer in charge, the cell meant for Arroyo, a 21-square meter redecorated office previously used by reporters.

There’s a bed, an air-conditioning unit, a sink with running water and a bamboo sofa. Arroyo could bring there other fixtures she needs, Bucayu said. If she planned to bring a TV set,  Bucayu said it would be all right since “she was President and it could not be considered a luxury.”

Mupas ignored reporters who asked about his thoughts on the police cell.

“He just listened and did not say anything,” Bucayu later said. Should the court decide on the police premises, Bucayu said he would have a perimeter fence constructed around the area.

Female guards would be posted there to attend to Arroyo’s personal needs, like going to the toilet and bath room a few steps outside the room,  he explained.

Small, but it will do

Bucayu said rules in all detention centers would be applied “so that no one could say we maintain a double standard,” he said. These include regulating visiting hours for detainee’s families, and immediate access to lawyers and doctors, he pointed out.

Asked if she would be allowed to use her cell phone, Bucayu appeared to be uncertain when he answered in the negative.

“This is quite small,” Pelicano said of the police cell. “But if there is no other place, I think this will do.”

The inspections were to ensure that any potential detention facility  was “appropriate” for the needs  of the accused, like its proximity to a hospital when needed, as well as the security arrangements of each place, said Pelicano who indicated the choices had been narrowed down to either the veterans or orthopedic hospitals.

“But this is still unofficial. All four venues we visited are still possible choices,” Pelicano said, adding that he and Mupas have yet to discuss the matter.

The clerk of court said he expected to receive today the formal pleadings from the prosecution and the defense regarding the venues for Arroyo’s detention.

Pelicano added that the court may also conduct similar inspections on other possible venues for house arrest should the defense formally ask for it.