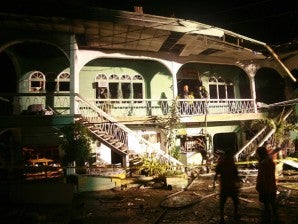 ATROCITY IN ZAMBOANGA An explosion ripped a two-story budget hotel in Zamboanga City late Sunday, leaving at least three people dead and 27 injured, according to local media. The cause of the explosion is still under investigation. AP

ZAMBOANGA CITY—It was not the kind of big bang that Clifford Lanipa and Christine Isidro expected on the eve of their Christian wedding scheduled Monday in the city.

Investigators believe the blast and the ensuing fire that gutted the hotel at 9:30 p.m. on Sunday was a terrorist strike and was not linked to the wedding, said Senior Superintendent Edwin de Ocampo, acting city police director.

Still, many of the victims were from a group of 23 relatives and friends of Lanipa, an architect, who occupied six of the hotel’s 35 rooms for the planned 3 p.m. wedding at the three-star Asturias Hotel, a kilometer away.

The tragedy forced the postponement of the wedding.

The blast was believed to be one of two simultaneous bombings planned by the Abu Sayyaf. The other would have been in Isabela City on nearby Basilan Island, where two explosives were separately found and safely defused by authorities on Sunday afternoon, De Ocampo said.

It was similar to what happened at Red Palm Inn in Barangay Guiwan here on October 9 and at Mons Kitchenette in Isabela City on June 25, Chief Superintendent Felicisimo Khu, head of the Directorate for Integrated Police Operations for Western Mindanao, told reporters.

The hotel blast, caused by about 10 kilograms of TNT powder, was one of the most high-profile bombings this year blamed on the Abu Sayyaf, which has been weakened by years of battle setbacks. Khu said the bomb had gasoline, “that’s why after the blast, a fire followed.”

It was so powerful it caused much of the second floor to collapse, blew off the hotel roof and shattered glass panes and windows from nearby buildings, Mayor Celso Lobregat told the Associated Press (AP).

Those killed were identified as Fidel Aguias, 24, a nurse and barangay councilman of Pagadian City in Zamboanga del Sur and Lanipa’s best friend; Roel Barcelona, an employee of the Department of Education; and a woman who signed the hotel’s guest book only as “Mariz P.”

The blast occurred in Room 226 on the second floor of the hotel, instantly killing Mariz P., who was occupying Room 225, and Barcelona, who was in Room 224 after checking in with his wife Elvie and their 2-year-old daughter Roela.

Aguias’ body was found on the ground floor, pinned by the cement slabs that collapsed from above, Lobregat said.

“Authorities were able to recover him in our room. He had head injuries, but there was no sign of burns, so I believe he was trapped,” Lanipa said.

Lanipa said his mother, Carmelita, and his 4-year-old niece, Christine, suffered serious injuries and were still at the intensive care unit. “My father and five other relatives were all injured. We were booked on the ground floor,” he said.

“We should not show that we’re panicking because that is what these troublemakers relish to see,” Lobregat told AP by telephone. “We have good leads. We will get all of them.”

Investigators were looking for a man, known only as Jeffrey, and a woman who checked in at Room 222 at around 7 p.m. on Sunday and hurriedly left the hotel an hour later, Lobregat said.

“In fact, in their haste, the woman’s perfume bottle fell and one of the occupants picked it up and returned it to the couple,” he said.

Khu said the occupant of Room 226, where the bomb was planted, was identified only as a certain Nap, “a Marine soldier” and “a regular customer.”

“Nap is not a suspect here,” he said. “We are just inviting him to help us shed light on the incident.”

A Marine officer, who was at the blast site, told the Inquirer that there were actually 15 members of the Marine Battalion Landing Team 5 based in Tawi-Tawi who were supposed to check in at the pension house. “They were on R and R (rest and recreation) and were on their way back from shopping,” he said.

Two of those wounded were identified as Sergeant Jerick Galang and Private John Lloyd Librando.

During Monday’s meeting of the city’s Peace and Order Council, De Ocampo said TNT (trinitrotoluene) was used as the main ingredient for the improvised explosives used by the Basilan-based Abu Sayyaf group under Puruji Indama.

He said investigators were trying to determine how the TNT bomb was detonated, adding that its design resembled those used by the Abu Sayyaf in past attacks in Basilan province, the group’s birthplace.

One of the two bombs defused in Isabela City at1:30 p.m. on Sunday was found inside a blue plastic bag near a hardware store owned by Parouk Majirul, an executive assistant of Basilan Gov. Jum Akbar, in Barangay Mabarakat, according to Chief Supt. Elpidio de Asis, police chief for Western Mindanao.

Colonel Ricardo Visaya, chief of the 104th Infantry Brigade, said another bomb was attached to Majirul’s motorcycle in Barangay Aguada at around 3:30 p.m.

“It is clear that the Abu Sayyaf Group was demanding something  from the owner (Majirul). They were extorting the owner and if the owner will not give in to the demand, they bomb the place,” Khu said.

Senior Inspector Cesar Memoracion said his bomb squad recently informed the budget hotel’s owner to be on guard for a possible bomb attack, citing intelligence information, which did not identify the source of the threat.

In January 2000, the hotel was rocked by a blast that killed three suspected Abu Sayyaf members assembling a bomb in a room, officials said.

The Abu Sayyaf was founded in Basilan in the early 1990s as an offshoot of a violent Moro insurgency that has been raging for decades. US-backed offensives have weakened the group, which is blacklisted by Washington as a terrorist organization, but it remains a key security threat.

The Abu Sayyaf has about 380 armed fighters and survives mostly on extortion and kidnappings for ransom. Its members are believed to be holding an American, an Indian, a Malaysian and a Japanese convert to Islam, along with a number of Filipino hostages in Basilan and nearby Jolo Island. With a report from AP