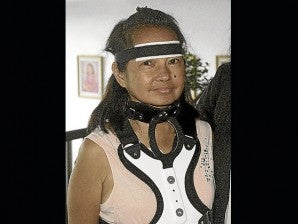 HOUSE OR HOSPITAL? What will it be for Pampanga Rep. Gloria Macapagal-Arroyo? Continued hospital arrest in a government military hospital or house arrest? AP

Gloria Macapagal-Arroyo wants to be detained in her sprawling house at the swank La Vista subdivision in Quezon City. But her chief accuser says: No way.

Brillantes said he preferred that  the former President and now Pampanga representative be detained at the headquarters of the Southern Police District, which placed her under its custody on November 18 after the Pasay City Regional Trial Court (RTC) issued a warrant for her arrest for election sabotage ostensibly to stop her from fleeing the country.

“It is within the jurisdiction of the RTC, but that is up to the court to decide,” he told reporters.

Told that Arroyo’s lawyers would ask Pasay City RTC Judge Jesus Mupas to put her under house arrest, Brillantes said, “We will oppose that officially as soon as we receive the copy of the motion.”

Defense lawyer Laurence Arroyo (no relation to the former President) told reporters late Monday that a 17-page urgent petition for house arrest was sent hours earlier to the Comelec, the main complainant in the nonbailable offense in connection with the alleged rigging of the 2007 senatorial elections in Maguindanao province that is penalized with life imprisonment.

“She’s no ordinary person,” the defense lawyer said in seeking the confinement of his client at No. 14 Badjao Street, La Vista, Quezon City.

“She’s a former President and we should give the respect due her,” he said, adding the petition would be sent later to the Pasay City RTC for a hearing on Thursday.

The petition said that the former President would not escape and would face the charges against her. It said that while there were indications her condition was improving, Arroyo needed continued medical care after undergoing three major surgeries.

“On the other hand, transferring President Arroyo to a prison facility may aggravate her condition or impede her recovery,” said the petition, which also urged the Comelec to allow her to remain at St. Luke’s Medical Center in Taguig City for another five days.

The 64-year-old Arroyo is currently under hospital arrest at St. Luke’s where she is under medical treatment purportedly for a rare bone ailment.

Speaking to reporters, De Lima said Arroyo’s camp must present a strong justification. “The public might (question) if such an arrangement, like hospital or house arrest, is automatic if the accused is a former President,” she said.

“We must balance the decision with the perception of the public … But this is all still subject to the discretion of the court,” De Lima said.

She also said she would defer to Brillantes “because the Comelec is the primary public prosecutor.”

In a news conference Monday, militant lawmakers opposed house arrest for Arroyo and disputed claims over the weekend by Senators Miriam Defensor-Santiago and Gregorio Honasan that the administration move to “humiliate” the former President could provoke an international backlash.

“It will be more embarrassing for the Philippines if we do not follow our own laws just to accommodate a former president. The international community will respect us more if we will jail GMA (Arroyo) because we will send a message that we punish those who violate our laws,” said Kabataan Representative Raymond Palatino.

“House arrest is a double standard. It is a rest, it is not arrest,” said Gabriela Representative Luzviminda Ilagan.

Anakpawis Representative Rafael Mariano said everybody should be equal in the eyes of the law.

The lawmakers have filed House Resolution No. 1942 seeking the immediate detention of Arroyo  in an ordinary jail  “just like any other person accused of a nonbailable offense.”

The resolution said house arrest “so early in the process of the case constitutes special treatment given to Arroyo and is unacceptable for it only shows how the powerful and the rich continue to be given preferential treatment despite the terrible crimes for which they are accused of.”

“The backlash would happen if she is allowed to escape and she never gets back,” said Senator Francis Pangilinan.

“If there is anybody who should be blamed for placing her in a humiliating position it is GMA herself,” said Senator Panfilo Lacson.

“We have been very consistent from the very beginning in saying that this matter is now solely with the trial court judge,’’ deputy presidential spokesperson Abigail Valte told reporters.

“We cannot think why there would be a backlash if the President was just out to fulfill his promise that we should have accountability for things that happened in the past,’’ Valte said.

“We are not embarrassing former President Arroyo. The process that she is undergoing now is the same process given to any accused facing a case in our system.’’

The Pampanga Mayors League called for Arroyo’s arrest in her Lubao hometown residence so “she can render service from there” to her constituents. With reports from Marlon Ramos and Gil C. Cabacungan Jr., Christine O. Avendaño, Miko Morelos and Jeannette I. Andrade in Manila; and Tonette Orejas, Inquirer Central Luzon