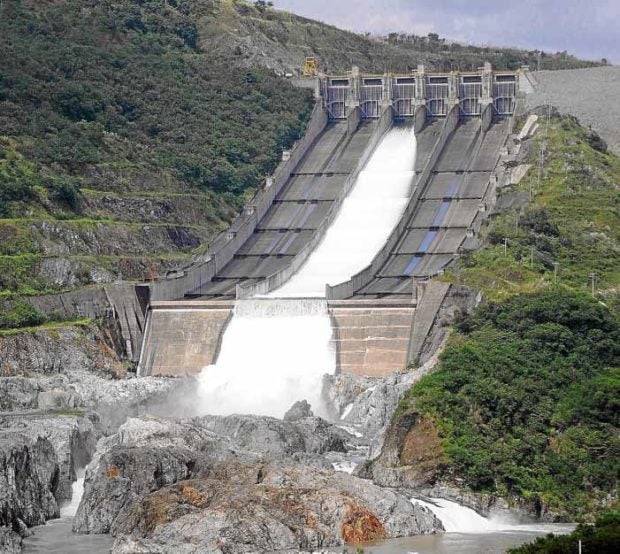 DAM SPILL Operators of San Roque Dam in Pangasinan, shown in this photo taken in 2011, opened four floodgates on Sunday morning to release water in excess of its normal capacity level. —WILLIE LOMIBAO

At least four dams in Luzon released water over the weekend, contributing to flooding in nearby communities.

Torrential rains prompted operators of Ipo and Bustos dams in Bulacan to release water at midnight on Saturday, the Provincial Disaster Risk Reduction and Management Office (PDRRMO) said on Sunday.

Rains raised the level of Ipo Dam’s reservoir to 101.48 meters above sea level (masl), breaching its spilling level of 101 masl. But by 5 a.m. on Sunday, operators closed its gate when the elevation stabilized at 101.21 masl.

Bustos Dam at press time was releasing 543 cubic meters per second of water to reduce water at its reservoir, which rose to 17.80 masl. Bustos’ spilling level is 17.50 masl.

It started releasing water at 6 a.m. on Saturday when the water level reached 17.76 masl but sealed the gates at midnight.

Minutes later, it lifted the gates when torrential rains resumed in the mountainous areas of the City of San Jose del Monte and the Bulacan towns of Angat and Marilao.

In Benguet, Binga Dam opened two spillway gates on Saturday night when its water elevation was recorded at 573.83 masl, still below its maximum level of 575 masl, according to the Office of Civil Defense.

Residents living near waterways were advised to be alert and evacuate to higher ground or to evacuation centers as needed. 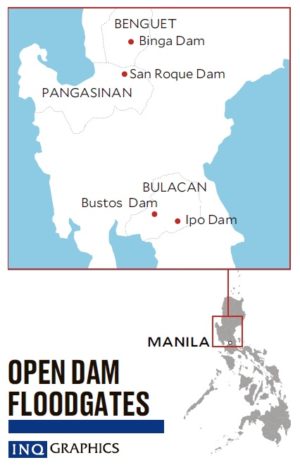 Reports reaching the PDRRMO of Bulacan said 40 villages in three towns were affected by floods.

In the City of Meycauayan in Bulacan, 243 people (59 families) at Barangay Malhacan were relocated to the village hall due to 1-meter floodwater.

In Calumpit, the flood rose to up to more than a meter at Barangay Sapang Bayan and up to a meter in other areas. Floods of up to a meter were also recorded in Marilao town.

The PDRRMO was verifying reports that floods also struck communities in the towns of Bulakan, Balagtas, Bocaue, Hagonoy, Paombong, Bustos and Guiguinto, partly due to the high tide.

In the Cordilleras, 83 families received government aid after they were evacuated from landslide-prone communities in the Benguet towns of Itogon and Tuba.

At 4 p.m. on Saturday, 15 people were stranded when ferry services crossing Abra River were suspended at Bucay town in Abra province. The passengers slept at the municipal evacuation center.

Seven roads leading to the vegetable-farming towns of Atok and Buguias in Benguet suffered erosions, but most of these access routes were opened by Sunday afternoon. —Reports from Carmela Reyes-Estrope, Vincent Cabreza and Darryl John Esguerra