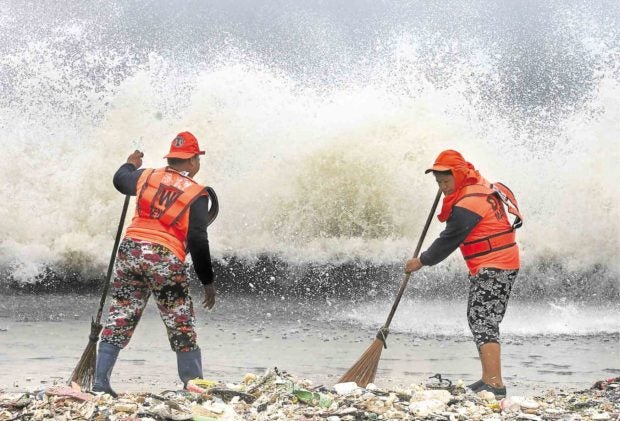 SEA RETURNS TRASH Workers from the Department of Public Works and Highways sweep garbage that have been washed ashore from Manila Bay onto Roxas Boulevard in Manila. Monsoon rains on Sunday induced flooding and brought tons of trash, mostly plastic, from the bay. —MARIANNE BERMUDEZ

Manila Archbishop Cardinal Luis Antonio Tagle on Sunday called on parishes in the archdiocese and good Samaritans to open their doors to people affected by the flooding.

Marikina City experienced an “Ondoy-like effect,” with almost 70 percent of its land area submerged in floodwater by Saturday, according to Mayor Marcelino Teodoro.

Teodoro said the two previous monsoon rains in July brought around 40 to 70 mm of rainfall in a span of five days.

“Now we received 150 to 170 mm of rainfall in just five hours,” the mayor told the Inquirer.

“This is what we call a ‘monsoon surge.’ It is a new phenomenon, something unknown to our experiences before. This is truly brought about by climate change,” he added.

Floodwaters in 762 areas had subsided by 6 a.m. on Sunday, Roque said.

The southwest monsoon was enhanced by Karding (international name: Yagi), which made its way out of the Philippine area of responsibility (PAR) on Saturday, according to the weather bureau.

As of 3 p.m. on Sunday, Karding was spotted 665 kilometers north-northeast of Batanes.

Although Karding has moved out of PAR, it will continue to induce the southwest monsoon and bring rains over Metro Manila and parts of Luzon until Wednesday, according to the Philippine Atmospheric, Geophysical and Astronomical Services Administration (Pagasa).

A new tropical storm with the international name “Leepi” is expected to enhance the southwest monsoon once it moves closer, according to Pagasa forecaster Aldczar Aurelio.

During the onslaught of Ondoy, the river swelled to 23 m, flooding many communities along its banks and in low-lying areas.

Dave David, officer in charge of the Disaster Risk Reduction and Management Office, said that more than 20,700 people had evacuated to 21 centers across the city.

Police recorded a single death due to the bad weather on Sunday. Dioscoro Camacho, 36, was found dead along Milflores Street at Barangay Concepcion Uno, around 5 a.m. 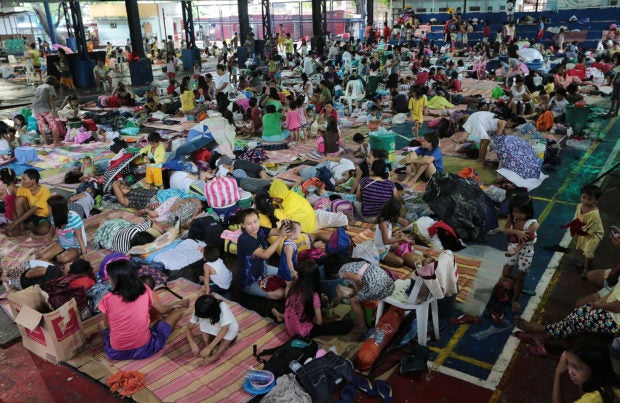 Lisa Fernandez, 36, said she, her husband and their seven children immediately left their home on Santol Street at Barangay Libis Bulelak, Malanday, as the waters rapidly entered their home and rose to waist-level.

Taking shelter at Bulelak Gym along with 172 other families, the Fernandez family took a couple of belongings with them, storing their clothes and appliances at a higher level inside their home.

To Lisa’s dismay, however, the muddy floodwaters reached up to their roof, washing away their appliances and her children’s uniforms and schoolbooks.

“Our house still stood but the roof has already caved in,” she told the Inquirer after she visited their home after the floods subsided on Sunday morning.

“We wanted to come back to get a few things, but there were none left,” she added.

“My children ask me: Mama, can we still go home? Can we still go to school?” she said in between tears. “We are really back to square one. I hope the government can help us.”

Aside from temporary shelters, the city government provided food and basic medicines to the evacuees.

Teodoro is appealing for help for his city, which has been placed in a state of calamity.

Malacañang said the government and the private sector had released P120.4 million in assistance to families affected by the rains and severe flooding.

As late as Sunday morning, several roads in Metro Manila remained impassable due to floods, highlighting the systemic woes that make standstill traffic a regularly predictable consequence of prolonged rains.

Manila’s two main evacuation centers in Delpan and Baseco recorded 300 evacuees as of 2 p.m. on Sunday.

In Quezon City, 3,208 individuals were still at evacuation centers as of 2 p.m.

In Calabarzon (Cavite, Laguna, Batangas, Rizal and Quezon provinces), flooding and landslides sent some 22,053 people to flee to evacuation centers, according to the regional police.

At least 18,400 evacuees were in Rizal province, the regional disaster risk reduction and management office said on Sunday.

Flood as high as 2 meters hit San Mateo, Rodriguez and parts of Antipolo City, all in Rizal province.