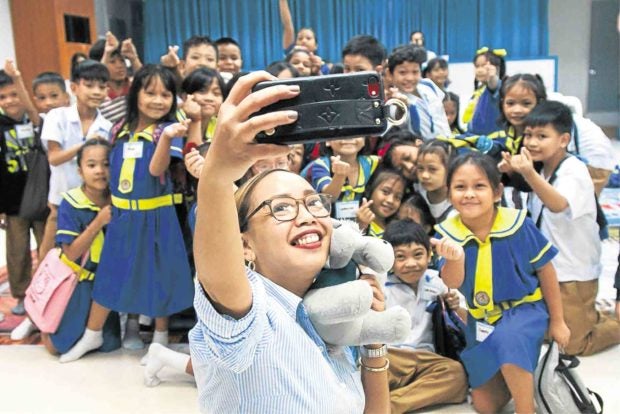 Heroism knows no age and size, and can manifest in everyday acts of kindness.

This was the message that some 60 children, aged 7 to 9, gathered from several stories during the Inquirer Read-Along session on Saturday.

Bautista read “Si Carancal Laban sa Bongbongeros” by Rene Villanueva, which tells of how a pint-sized boy led the townsfolk in driving away fishermen who were using dynamite and destroying marine life.

“The story reminds us of the apathy of some Filipinos who tend to act on a problem only after being reprimanded about it.  Worse, others would only do something after the problem had gotten worse,” Bautista said.

Quezon read a retelling of Lapu-Lapu’s Battle of Mactan, as seen through the eyes of a brave boy in “Si Makisig” by Lamberto Antonio.

Abacan narrated Michael Coroza’s “Ang mga Lambing ni Lolo Ding,” the story of a grandfather whose terms of endearment became seeds of character that later manifested itself in enduring acts of kindness that may also be considered as everyday heroism.

“I think the session was less about the stories and more about how kids, even at the Grade 3 level, understand that heroism is possible for everyone, even [children] their age,” said Quezon, a first-time Inquirer Read-Along storyteller.

“Being a good citizen is in itself a noteworthy commitment and the children understand this, so it’s encouraging because at a time when we hear that people have become apathetic, you encounter alert, curious and concerned kids,” Quezon added.

One doesn’t need to be a superhero to be emulated by kids, Bautista said. What is important is that the acts children see or hear about are good, because they tend to imitate those.

“Children’s consciousness are like a sponge that absorbs everything, whether good and bad. If you let them absorb all the good deeds, they will carry those values as they grow,” Bautista added.

For Christal Mae San Andres, 7, Lolo Ding’s story taught her the importance of listening to elders for the knowledge and wisdom they could impart that would enable her to help others in the future.

Helping others and defending those in need can be considered acts of heroism, said Radiance Herman, 8, whose favorite story at the session was Carancal’s act of courage.