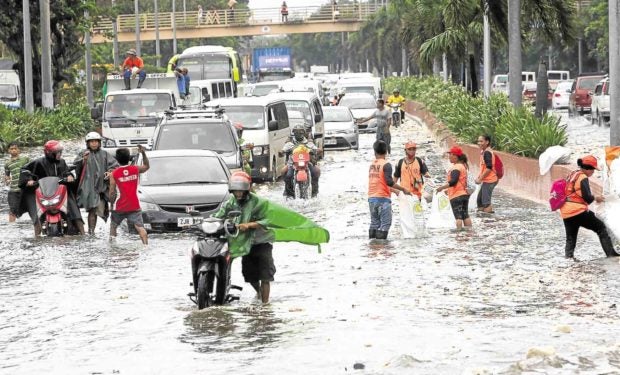 Tropical Storm “Karding” (international name: “Yagi”) has left the country. but it was hardly good news as Luzon and some areas in the Visayas continued to experience moderate to heavy rains as Karding continued to enhance the southwest monsoon on its way out.

The Philippine Atmospheric, Geophysical and Astronomical Services Administration (Pagasa) said southwest monsoon or “habagat,” made stronger by Karding, would continue to bring scattered to widespread monsoon rains over Luzon.

Moderate to heavy rain was expected in Metro Manila, the Ilocos and Cordillera regions and the provinces of Zambales, Bataan, Tarlac, Pampanga, Bulacan, Cavite, Laguna, Batangas and Rizal, Pagasa said.

Pagasa said Karding was already out of the Philippine area of responsibility by 3 p.m. on Saturday and was spotted 805 kilometers northeast of Basco town, Batanes.

Sections of Metro Manila were hit by gutter-deep floods and a surge of plastic waste and trash from Manila Bay.

A now viral video uploaded by a netizen showed truckloads of trash washed into both lanes of Roxas Boulevard by waves as tall as buses, turning the usually picturesque area into a river of garbage and rendering a section of the road impassable to light vehicles early on Saturday.

Up to knee-deep floods in major thoroughfares in Metro Manila crippled parts of the metropolis and forced the cancellation of college classes.

In Baguio City and the rest of the Cordillera region, monsoon rains disrupted transportation from Friday night to Saturday morning.

Access roads remained open, though, including farm roads that allowed traders to bring produce from Benguet to Metro Manila, the Office of Civil Defense said.

Pagasa said the volume of rain dumped from 8 a.m. on Friday to 8 a.m. on Saturday was 146.6 millimeters, one of Baguio’s highest.

Kennon Road had been closed to traffic as a precaution against rock fall.

In Pangasinan province, strong rains and high tide flooded Dagupan City, with downtown areas under up to a meter of water.

August is the month when high tide reaches more than a meter high, he said, adding that floods would subside in the next three to four days. —Reports from Melvin Gascon, Krixia Subingsubing, Yolanda Sotelo and Vincent Cabreza