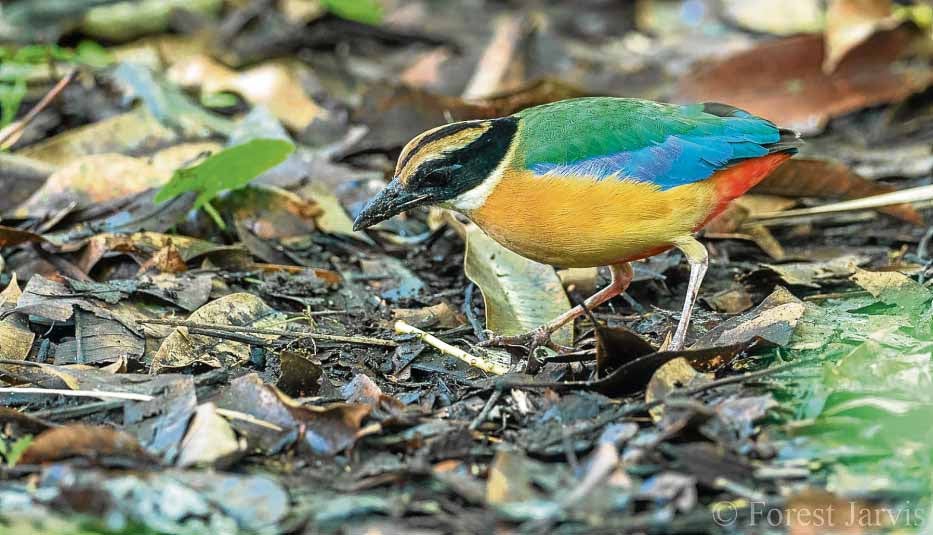 An unexpected appearance of a dazzling visitor at a man-made forest in Negros Oriental province set hearts aflutter in the small but tightly knit birding community in the Philippines.

Vendiola, who started and continues to maintain Liptong Woodland, took a set of blurry pictures of the colorful visitor and uploaded these on Facebook in July.

Despite the poor quality of the photos, it was clear that Vendiola’s feathered guest was a pitta, a ground-dwelling family of birds characterized by their brilliant plumage.

Pittas are also known as “jewels of the forest” for their brilliant, jewel-like colors.

The initial comments on Facebook identified the bird as the hooded pitta (Pitta sordida), a widespread and common species in the Philippines.

But an eagle-eyed birder saw the photos and said that it could be something rarer. Much rarer.

The pitta in the photos has buff (pale yellow-brown) underparts, a detail that rules out the hooded pitta, which has mostly green underparts.

The mystery pitta has a brown forehead and buff eyestripe contrasting with a black face, while the hooded pitta has an all-black head.

A handful of birders immediately flew to Liptong Woodland to confirm what has become one of the most exciting finds in recent Philippine birding history.

The forager on the forest floor of Liptong Woodland turned out to be a blue-winged pitta (P. moluccensis), a species that was recorded only twice in the Philippines — in Palawan province in January 1898 and Basilan province in February 1907, according to “A Guide to the Birds of the Philippines” by Robert S. Kennedy, et al.

Vendiola has stumbled upon a bird that was last seen in the Philippines 111 years ago.

Of the six, the blue-winged pitta had the longest historically recorded gap between the last and the most recent sighting.

The blue-winged pitta, according to the “Handbook of the Birds of the World,” breeds in parts of Myanmar, China, Thailand, Laos, Cambodia, Vietnam and peninsular Malaysia, and migrates to Sumatra and Borneo.

How this pitta ended up in Bacong is anybody’s guess. One possible explanation is that it overshot Borneo while on migration and found itself in the Philippines.

Forest Jarvis, an accomplished birder who has traveled extensively across the Philippines to document its wildlife, was the first local birder to go to Bacong to confirm the mystery pitta’s identity and photograph it.

“Seeing rare birds is excellent,” Jarvis wrote in a Facebook post describing the experience. “It’s even better when that bird is one as beautiful as a blue-winged pitta … I’ve had very few nature experiences that compare [to it].”

Vendiola is hoping that the amazing discovery will spur greater awareness of the value of native tree woodlands and wildlife sanctuaries, such as Liptong.

He began planting the trees himself in this two-hectare woodland in 2006. Today, it is a thriving forest with 226 native plant species, 34 of which are dipterocarp or hardwood trees native to the Philippines.

Forestry students use Liptong as an outdoor laboratory, while birders visit it to look for endemic species, such as Negros scops owl (Otus nigrorum) and black-belted flowerpecker (Dicaeum haematostictum), Vendiola said.

For his efforts, Vendiola received the Ramon Aboitiz Foundation award for Exemplary Individual in the Visayas in 2012. He is also the first person to receive the honor of “Rainforest Hero” in the 2018 Ugmad Awards of Visayas State University. —CONTRIBUTED

[Editor’s Note: Amado Bajarias Jr. is author of “A Field Guide to Flight: Identifying Birds on Three School Grounds.” Published in 2017, the book was cited the Best Book in Sciences during the 36th National Book Awards last year.]