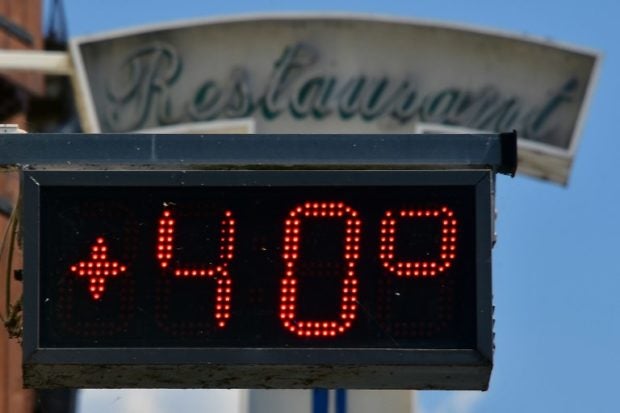 A picture taken on August 7, 2018, an electronic display above the entrance of a restaurant displaying 40 degrees Celsius in the French south-central city of Entraygues-sur-Truyère, during an on-going heatwave in Europe. AFP

Weeks of nonstop sunshine and near-record temperatures have caused droughts and seen tinder-dry forests consumed by wildfires from the Mediterranean to the Arctic Circle, in what many fear could be the region’s new normal in an era of climate change.

The devastating effects of the heatwave were visible from space, according to images of swathes of arid landscape taken by the German astronaut Alexander Gerst from the International Space Station.

“After several weeks of night flying, I was able to take the first day pictures of central Europe and Germany. The sight is shocking. Everything that should be green is parched and brown,” Gerst said on Twitter.

Spain and Portugal approached record temperatures at the weekend, with the mercury hitting 46.6 degrees Celsius (116 Fahrenheit) at El Granado in Spain and 46.4 C in Alvega, Portugal, according to the World Meteorological Organization (WMO).

While the deadly hot spell is expected to ease in parts of western Europe in the coming days, firefighters in Spain and Portugal struggled to contain wildfires that have swept southern areas.

In the southern Portuguese holiday region, residents and tourists have been evacuated from around an Algarve resort town as fire crews struggled to extinguish wildfires that have raged for days leaving 30 people injured, one seriously.

Hundreds of firefighters and soldiers used helicopters and planes, as well as several hundred vehicles, to douse the blaze around the mountain town of Monchique as strong winds fanned the flames, with meteorologists warning of “significant” gusts to come.

In the Valencia region of neighboring Spain some 2,500 people were driven from their homes overnight to escape flames that have already swept across around 1,000 hectares, as fire crews struggled to bring the fires under control.

A spokesman for the regional health department in the southwestern region of Extremadura, near Portugal, said a 66-year-old man and a 75-year-old woman who died in recent days had both succumbed to heat stroke.

This brings to nine the number of people to have died as a direct consequence of the heatwave.

While parts of Western Europe are forecast to have a reprieve in the coming days, the sweltering temperatures are expected to travel eastwards across the region.

“The same circulation pattern persists which brings hot air from North Africa over Europe, but this whole system is now moving slowly to the east so the western parts of the continent will get cooler air from the Atlantic,” said WMO spokeswoman Sylvie Castonguay.

“This will relieve the situation in most countries in southwestern Europe, while the hot weather conditions will spread further to Eastern Europe.”

In France, a drop in temperatures caused by thunderstorms across the country signaled an end to the heatwave on Tuesday afternoon.

However, violent hailstorms with gusts of up to 120 kmh (75 mph) were predicted in the evening and dark clouds were gathering above Paris, where high winds were expected.

Wildfires have sparked in parts of northern Europe, with blazes still burning up to the Arctic Circle in Sweden, which sizzled in record temperatures in July that also caused mountain top glaciers to melt, according to the WMO.

The Arctic regions of Finland and Norway have been so hot that they have experienced 12 “tropical” nights so far this year, with temperatures topping 20 C.

Roughly a thousand kilograms (a ton) of dead fish have been scooped from rivers and lakes in Switzerland in recent days, as the heat raised water temperatures.

“We have been watching dead fish for several days floating down the Rhine,” Andreas Vogeli, an official with the hunting and fisheries department in northern Schaffhausen canton, told the public broadcaster RTS.

The most severely affected area is the stretch of the Rhine river that runs from Lake Constance to the Rhine Falls.

The cold-loving grayling, a member of the salmon family, can struggle when water temperatures exceed 20 C, but certain areas of the Rhine have recorded temperatures above 27 C in recent days.

In Britain, the sustained heat has seen a spike in cases of avian botulism reported among wild water birds like swans and geese.

Botulism, a naturally occurring neurotoxin activated in warm weather by bacteria in silt, is passed along to water birds through infected bugs, causing paralysis. It is not contagious to humans.

“Many drown because they cannot lift their heads out of the water,” Melanie Nelson, a trustee at the Swan Sanctuary in southeast England, told AFP.

Temperatures in southeast England were expected to climb to 30 C on Tuesday before easing off for the rest of the week. /cbb

Read Next
‘Karding’ lingers off Luzon, may enhance habagat – Pagasa
EDITORS' PICK
Do all the things you do, faster
Motorcycles, smartphones, and cash prizes up for grabs in TNT’s ‘Tuloy Ang Saya’ Raffle in Mindanao
House energy committee chair Arroyo bats for cheap electricity
NCR at increased COVID risk again
New PS-DBM director says DepEd laptop MOA ‘not legal’
House okays budget; ways to go in Senate
MOST READ
Robredo’s tarpaulin portrait at Palace just a ‘placeholder’
Shopee PH gets flak for getting Toni Gonzaga
Robredo supporter tackles elephant in room: No massive fraud in 2022 polls, surveys were just right
DepEd: We are in a crisis situation in education sector
Don't miss out on the latest news and information.