Bongbong wants Associate Justice out of his election case 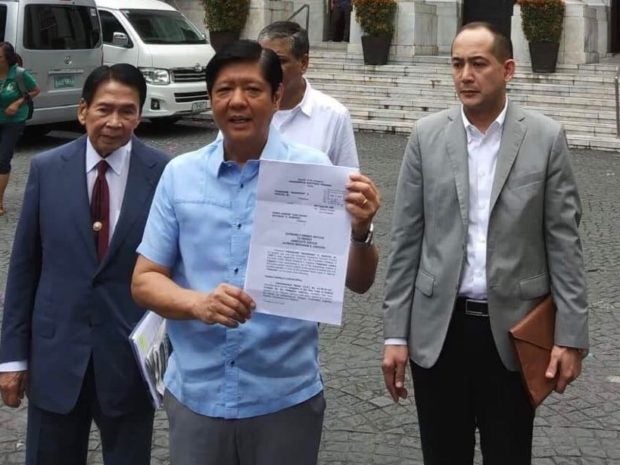 Caguioa is the justice in-charge of Marcos’ election protest, which is currently pending before the PET.

In a 13-page “Extremely Urgent Motion to Inhibit,” Marcos accused Caguioa of being biased towards the “yellow brigade,” noting that the magistrate is not only a former Cabinet Secretary during the administration of President Benigno S. Aquino III but a childhood friend of the former leader as well.

Marcos said that given Aquino has nothing but harsh words against him and his family, his childhood friend should have “readily recuse[d] himself from participating in the election protest filed by his former boss’ arch nemesis.”

“Regrettably, however, it would appear that Associate Justice Caguioa had other plans because he even took the responsibility of being the ponente in the said election protest,” read Marcos’ urgent motion.

The son of the late strongman Ferdinand Marcos also said Caguioa’s wife, Pier Angela “Gel” Caguioa, “was not only an anti-Marcos advocate but was also an ardent supporter of Robredo, having actively campaigned for her during the May 2016 elections.”

“Accordingly, it is most respectfully prayed by the undersigned protestant that Associate Justice Caguioa immediately RECUSE and INHIBIT himself from participating in any of the proceedings in connection with the above-entitled election protest,” Marcos asserted.

The column referred to a Facebook post of a certain Tonyboy Tabora, reportedly a former Baguio City Councilor. According to Marcos, a series of Viber messages were posted in the Facebook page of Tabora on July 13, 2018 at 8:27 a.m.

The online column likewise had an embedded video titled “The Conjugal Conspiracy” insinuating the alleged relationship of Aquino and Caguioa that immediately went viral with 8,800 shares and 312,000 views as August 4, 2018.

Marcos further cited their previous request from the PET to allow his camp to print ballot images. He said the PET granted his request and was asked to pay P2.9 million. But when prints have already been made, Marcos claimed the PET refused to give them the copy. He moreover claimed that Robredo’s camp was given soft copy for free.

(Another clear demonstration of bias, we sought permission to print the ballot images. We were allowed and asked to pay P2.9 million. So we agreed to this and paid. The copies were made. But afterwhich, they do not want to give us what we have paid for. Robredo was given a soft copy for free… very clear that it is unfair treatment.)

With regards to the Pansol outing where one of Robredo’s revisors joined the PET staff,  Marcos said they were only informed that an investigation was conducted and sanctions were imposed only after they filed a manifestation.

Marcos said he wants to ignore the instances of bias including Caguioa’s close ties with Aquino and his dissenting opinion on the Marcos burial case where he “attacked” his family because he does not want to further delay the resolution of his protest.

[After the Pansol, viber screenshots about Mrs. Caguioa, I knew that the bias is clear. I cannot let it pass.]

Marcos clarified that the motion he filed against Caguioa is not meant to attack the SC.

“This is to preserve the justice that we expect from the Supreme Court,” Marcos said.