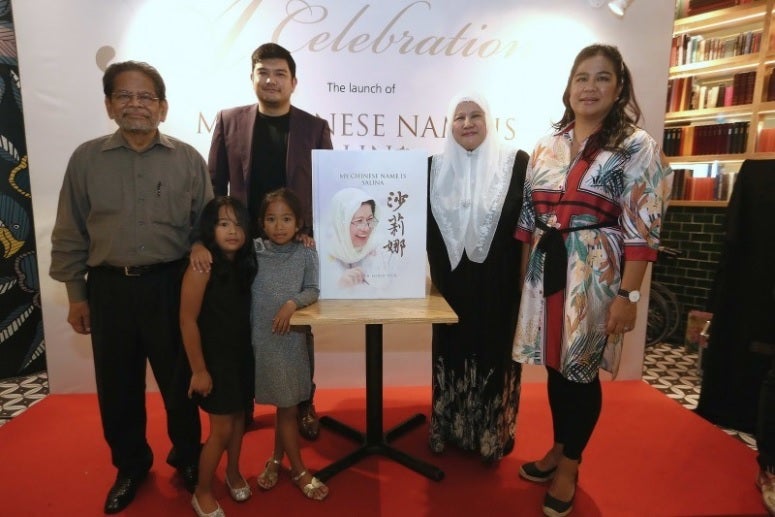 Graduated from Teluk Kemang Chinese Primary School, she studied few years in Tsun Jin High School and then studied in Taiwan National University with a scholarship.

After returning from Taiwan, she joined civil service. Apart from being a member in the Muhibbah group under Prime Minister’s Department, she also served under special committee under Foreign Affairs, national TV and movie censoring board.

Launching of her new book My Chinese Name Salina, she said education was different back in 1950s, each ethnic group would speak its own language then, including her own family.

She said in the 50s, Chinese was not given priority. If a non-Chinese is studying Chinese in Chinese Primary School and willing to further studies in Taiwan, this would be an odd scenario then. Salina’s persistence made her depart from the traditional practice.

“We did not  know that we were actually moving at ahead . I was only looking at receiving good education then. Now when I look back? I realise being given an opportunity to study in Taiwan is actually a privilege for us. “

Until she was given a chance to receive Chinese education and being the only child in a family to study in Chinese primary school, she realised the true meaning of “ nothing is impossible.”

Salina said she was very young and did not read a single Chinese word. But it did not  dampen her perseverance to learn Chinese .

“The little non-Chinese girl who wished to study in Chinese primary school to learn Chinese. She did not foresee that her dream could come through. The little is me. “

ADVERTISEMENT
Read Next
SK official, 1 other yield P2.1-M shabu in Pasay City buy-bust operation
EDITORS' PICK
PH preps for China virus: Question of when, not if
Beyond water service: Maynilad builds massive infrastructure projects to clean up Metro Manila waterways
Museums ‘put to sleep,’ churches closed amid volcano’s unrest
Seventh judge assigned to handle De Lima case
SM continues to send relief assistance to remote towns in Batangas
Get exciting deals and discounts when you download the new McDonald’s App
MOST READ
Taal Volcano flexes signs of restiveness anew
Passengers from Wuhan, China to be flown out of Kalibo, Aklan – CAAP
Part of Aurora Boulevard in Cubao closed from Jan. 25 – Feb. 1
Lacson on Duterte’s threat to end VFA over Bato’s canceled visa: Where is the connection?
Don't miss out on the latest news and information.