Hundreds of Filipino moms in show of support for breastfeeding 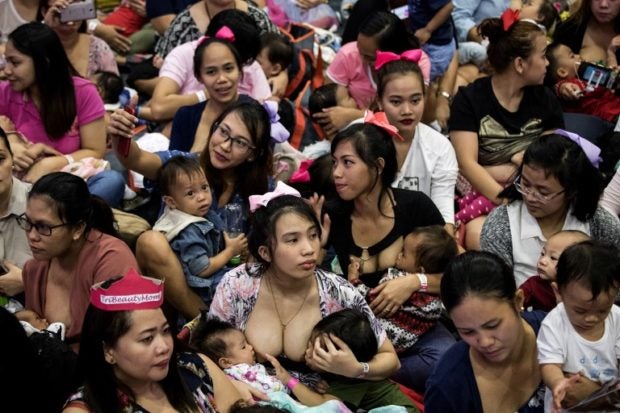 Hundreds of Philippine mothers simultaneously nursed their babies in public on Sunday, some of them two at a time, in a government-backed mass breastfeeding event aimed at combating child deaths.

About 1,500 women, some of them wearing tiaras and superhero T-shirts, sat on the vast floor of a Manila stadium and let their babies suckle to the beat of dance music.

“Breastfeeding is love. It is difficult, but we do it for love,” said Abegirl Limjap, a pregnant 38-year-old property manager in a “Super Mom” superhero costume as she nursed her two boys, one aged five and the other 11 months.

The annual event aims to draw public support for a government campaign to get more mothers to switch to breast milk from infant formula, organizer Rose Padua told AFP.

The World Health Organization and the United Nations Children’s Fund recommend that children be given breast milk within the first hour of birth and be exclusively breastfed for their first six months.

Globally however, three in five babies are not breastfed early, putting them at higher risk of death and disease, the two UN agencies said in a report earlier this year.

Twenty-seven children out of every thousand died before the age of five in the Philippines in 2016, according to WHO data.

WHO and UNICEF estimate about half of Filipino babies were initiated into early breastfeeding in 2013, barely changed from 46 percent in 2003.

“It’s an empowering moment,” said first-time mother Joyce Balido, 29, as she cradled her four-month-old girl at the mass breastfeeding event.

“It was very difficult to establish a milk supply at first. I am sleep-starved but I committed myself to have my daughter exclusively breastfed,” added Balido, an engineer.

Sixty-one other mass breastfeeding events were held in other Philippine cities over the weekend, said Padua, the event organizer.

She said the country was on course to beat last year’s attendance of 4,775 nursing mothers in 25 events.