Trillanes twits Cayetano on his word-war with ex-President Aquino 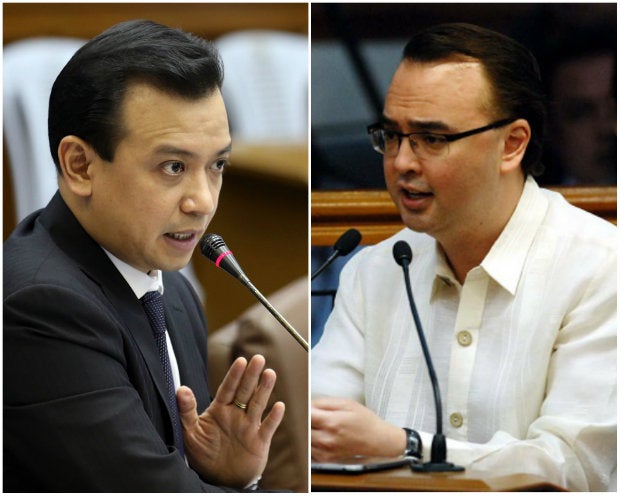 This was how Senator Antonio Trillanes IV on Sunday described Foreign Affairs Secretary Alan Peter Cayetano after his word-war against the previous administration.

In a recent letter of Cayetano to former President Benigno “Noynoy” Aquino III, he said that the latter was dodging “people’s main questions” on how his administration handled the sea row with China.

Cayetano also said that the former President chose to play with words as his response to an earlier letter sent by him.

However, according to Trillanes, Cayetano was still a “loyal ally of the Aquino administration” when the issue on sea row with China had sparked.

Trillanes said that during the Aquino administration, Cayetano did not question how the former President resolved the issue.

“Sec. Cayetano has proven to be a political snake. The Panatag standoff happened in 2012 during which time Cayetano was still a loyal ally of the Aquino administration, so obviously, he never saw anything wrong with how PNoy (President Noynoy Aquino) resolved it then,” Trillanes said in a statement.

“I clearly remember telling him, as well as the other senators then, of the gist of my mission as backchannel negotiator. For that matter, I had multiple media interviews about it but, again, Cayetano never saw anything wrong with it then,” he added.

In 2012, Trillanes was designated to be the backchannel negotiator of Aquino during the height of the Panatag shoal issue.

As a negotiator, Trillanes was tasked to minimize the tension between China and the country, and to lessen the Chinese vessels in the Panatag during that time.

According to him, there were about 100 Chinese vessel around the shoal from which he was managed to reduce to three.

“The refusal of China to remove the remaining 3 ships forced the hand of PNoy to file the arbitration case, which we eventually won,” he said.

Trillanes then posed questions to Cayetano and President Rodrigo Duterte with regard to the ruling of the arbitration court on the Panatag Shoal.

“‘Why didn’t you follow through on our historic victory at the arbitration court?’ Or better yet: ‘Why aren’t you fighting for our sovereignty the way you promised during the campaign?'” Trillanes said.

INQUIRER.net has reached out to Cayetano for comment, and the foreign affairs secretary has yet to respond. /je