Where ‘Big Brother’ watches – and saves lives from drugs 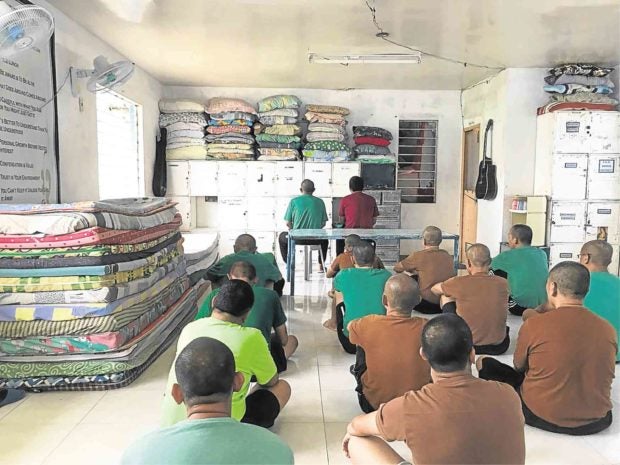 GETTING AHEAD OF THE GAME Residents of “Bahay ni Kuya” sit quietly during a session at the drug rehab center with their heads shaved. The period of detoxification, according to the center’s staff, causes hair problems. The center has expanded its program to include “Balay Silangan” to accommodate not only drug dependents, but also drug pushers in the city. —MARICAR CINCO

LIPA CITY—For the staff at “Bahay ni Kuya,” a drug treatment and rehabilitation center here, the story of a 58-year-old resident is a classic, and typical of most stories shared by the other residents.

The man, well past his prime and with a steady job and grandchildren, hardly seems a candidate for a drug problem.

His wife, 56, used to work in a factory in Metro Manila and spent most of her time away from home. Feeling lonely, the man started spending more time with a friend who turned out to be a drug addict.

It is this feeling of being neglected that drives most people to drug abuse, said Ramelo Mendoza, the center’s deputy director.

“They may have had problems with parents or spouses but couldn’t talk to their families about these,” the director said of the majority of cases that they’ve handled since the center opened its doors in 2012.

Bahay ni Kuya (Filipino for “big brother’s house”), a 500-square-meter facility at Barangay Bolbok in this city, describes itself as the only community-based drug abuse treatment facility in the region comprised of Cavite, Laguna, Batangas, Rizal and Quezon provinces that is being run by the local government.

But while the center used to focus on drug users, it has recently expanded its programs to help drug pushers as well.

On Tuesday, the center established “Balay Silangan” in coordination with the Philippine Drug Enforcement Agency (PDEA), the Dangerous Drugs Board and the national government to cater to drug pushers.

“You can be a [drug] pusher but not a user. You’re just doing business,” Mendoza said.

“There’s a demand [for drugs] and in order to cut that down, you have to do something about the suppliers,” he added.

Adrian Alvariño, PDEA regional director, said residents in the center were classified into either users or pushers, who undergo a different, although aligned, rehabilitation and reformation program.

At present, the facility caters to 104 residents, mostly male, 33 of whom undergo the Balay Silangan program.

Qualified to join other residents at Balay are surrenderees in the government’s “Oplan Tokhang” antidrug campaign, and those who have availed themselves of a plea bargain in their drug cases, Alvariño said.

Residents are assigned in dormitories in groups of 15 to 20, sleep together on the floor and share a common bathroom.  Female residents share a separate room.

“We do not offer luxury, freedom, not even good food.  We are bringing back the discipline that they have lost,” Mendoza said.

Despite the strict regimen, the center’s relapse record is a mere 1.4 percent, the equivalent of 15 cases, since it went operational.

But there are extreme cases—suicide attempts that lead to several assessments in the center, and eventually, commitment at the National Center for Mental Health, the center’s official said.

Others harm themselves or indulge in lewd acts, Mendoza said, adding that they explain to parents how the drugs had already affected the drug users’ brain.

A patient normally stays in the center for months, but the center’s deputy director said there was no prescribed period of recovery. The center also puts emphasis on the “after care,” and monitors residents once they return home to their families.

About half of the residents belong to poor families who cannot afford private facilities that usually charge about P25,000 a month, Mendoza said. As a government institution, the center’s services are all free of charge, he added.

“The only payment we ask for is for the residents to get better,” Mendoza said.