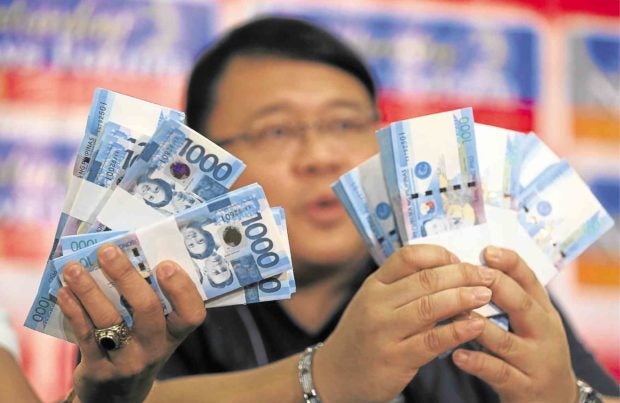 REWARD Lawyer Ferdinand Topacio and an assistant show the bundles of cash totaling P1 million put up by seven “concerned citizens” for information leading to the arrest of four left-wing former members of the House of Representatives who are accused of double murder. —NIÑO JESUS ORBETA

Four left-wing former members of the House of Representatives who were ordered arrested on murder charges by a Nueva Ecija court slammed a P1-million bounty allegedly offered by several businessmen and former clients of a lawyer known to be a staunch supporter of former President Gloria Macapagal-Arroyo and President Rodrigo Duterte.

Ferdinand Topacio on Saturday said seven “concerned citizens” would pay P250,000 for information that would lead to the arrest of each of the four — former Representatives Satur Ocampo and Teddy Casiño of Bayan Muna, Rafael Mariano of Anakpawis and Liza Maza of Gabriela. Maza has gone on leave as head of the National Anti-Poverty Council.

In a statement, Ocampo and his three coaccused described the bounty as “bizarre and unsettling at the same time.”

“Where did (Topacio) get the money to pay for the reward? Did it come from taxpayers’ money funneled through the Citizen’s Crime Watch (CCW), or from his client, former President Gloria Macapagal-Arroyo, under whose administration these trumped-up charges were initiated?” they said.

Topacio, who heads the CCW legal panel, denied the bounty came from Arroyo.

Showing bundles of the reward money to journalists during a press conference, Topacio said he recently met with the donors at a party in Quezon City where they brought up their concerns. The donation was coursed through the CCW.

“You will be surprised some people are already fed up with the antics of some of these politicians,” Topacio said.

The bounty donors are “simple businessmen” who are concerned about “what’s happening in the country,” he added.

Ocampo and the three others have said that the murder case was fabricated by state security agencies during Arroyo’s presidency when they also were charged with rebellion.

The four were charged with the murder of Jimmy Peralta, who was run over by a car in Bongabon town, Nueva Ecija, in December 2003, and Carlito Bayudang, who was shot dead at his home, also in Bongabon, in May 2004.

The two were members of Akbayan who were allegedly critical of Bayan Muna. Peralta was allegedly mistaken for his brother, Ricardo, the alleged real target of the attack.

However, in 2017, the Supreme Court ruled that the RTC must decide whether there was probable cause. On July 11, Turla issued the warrants after finding probable cause.

The four accused have asked the court to reconsider its decision and recall the arrest orders. Another judge will decide on their appeal after Turla inhibited herself.

Topacio urged Ocampo and the three others to surrender to authorities and prove their case in court.

“What is irritating to our friends in the private sector is that it seems these four are just laughing at the arrest order of the court. They are hiding because these are fabricated cases. It is not up to the accused to say that. It is up to the court,” Topacio said.

Presidential spokesperson Harry Roque on Saturday said Malacañang “has nothing to do with that (bounty).”

Bagong Alyansang Makabayan (Bayan) secretary general Renato Reyes said the reward was “nothing but a lame publicity stunt that unfortunately endangers the lives of the four accused.”

Topacio, however, cautioned the public not to arrest Ocampo and the others.

“Don’t arrest them because this will put your life in danger,” he said. “Just inform the police. Do not try to apprehend them by yourself … This is not a ‘dead or alive’ (reward). Please don’t shoot them. Do not harm them in any way because they are presumed innocent,” he said.

More than 170 people, including personalities from politics, arts, religious and other sectors condemned the arrest order and signed a petition asking the court to withdraw the warrants against the four.