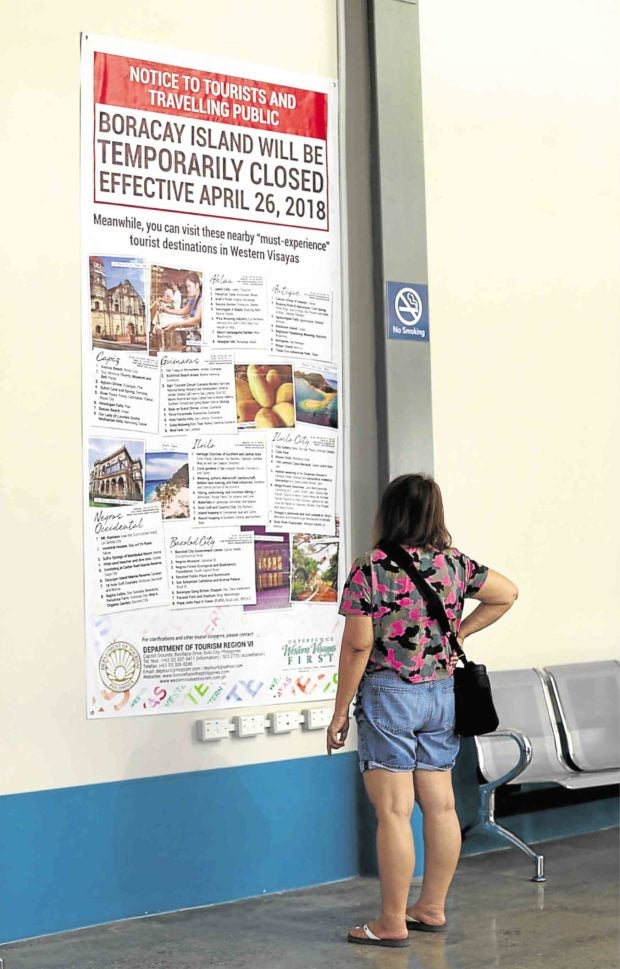 A passenger reads a notice announcing the closure of Boracay starting on April 26. —LYN RILLON

ILOILO CITY — Government hospitals in Aklan province are feeling the pinch from the closure of Boracay Island to tourists.

In a report, Aklan Gov. Florencio Miraflores said the closure of the world-famous resort island resulted in a sharp decline in revenues from the operation of the Caticlan Port on the mainland of Malay and the Cagban Port on the island.

Revenue from terminal and port fees subsidizes operations of Dr. Rafael S. Tumbucon Memorial Hospital, which is run by the province, and two other smaller government hospitals in Ibajay and Altavas towns.

Miraflores said as a result of the closure of Boracay to tourists, the three hospitals lost P160 million in annual subsidies from port and terminal fees.

The provincial hospital caters to at least 400 patients daily while the district hospitals in Ibajay and Altavas towns serve 50 to 100 patients a day.

The provincial government has resorted to a consignment system to acquire medicines and other supplies for the hospitals as part of cost-cutting measures.

Miraflores said the provincial government had to tap into its general fund to keep the hospitals running.

Engineer Roger Esto, provincial planning and development officer, said the hospitals could still service patients like they had been doing but purchase and upgrade of equipment have been put on hold.

The hiring and promotion of personnel have also been suspended.

The provincial government has also limited official travel of personnel to reduce expenses.

A state of calamity had been declared in the three villages of Boracay following the six-month closure of the island to tourist starting on April 26.

But officials of Malay town and Aklan province have also asked that a state of calamity be declared in the town and province because of the massive economic impact of the suspension of tourism in Boracay.