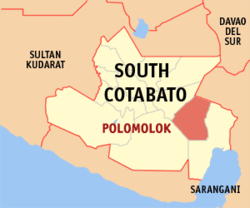 According to the latest update from Phivolcs, the earthquake rocked Polomolok, South Cotabato at 1:06 p.m.

Meanwhile, Tupi, South Cotabato felt an Intensity II jolt due to the quake.

Despite this, the Phivolcs assured that an aftershock is not expected. No damage was also reported in the affected areas.

The quake was tectonic in origin and had a depth of nine kilometers, according the Phivolcs report. /jpv