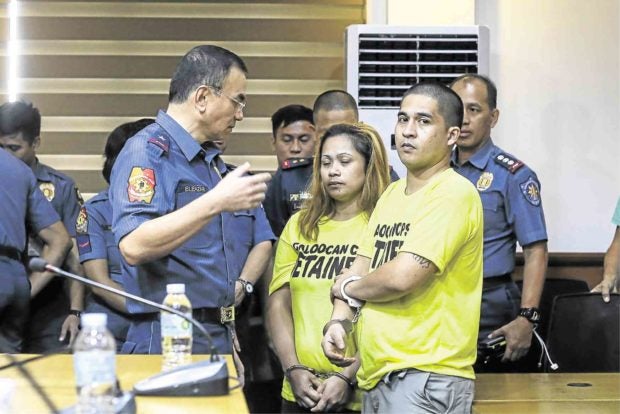 Former child star CJ Ramos again hogged the limelight after years of show biz inactivity on Friday, but not for an upcoming film or TV series.

Cameras and journalists huddled around the 31-year-old actor, whose real name is Cromell John Ramos, at the National Capital Region Police Office (NCRPO) in Taguig City after he was arrested for illegal drug possession.

Not the real target

According to NCRPO director, Chief Supt. Guillermo Eleazar, Ramos was collared after he was caught buying a sachet of crystal meth, locally known as “shabu,” from Louvella Gilen, alias Jackie, around 11 p.m. on Tuesday near his residence in Tandang Sora Avenue in Quezon City.

Eleazar, however, said that Ramos was not really the target of the operation but the latter was caught in the act of buying shabu from the targeted pusher.

Gilen, 36, was the main target of the buy-bust operation of Caloocan policemen after she sold a sachet of shabu worth P500 to an undercover operative.

Eleazar said they followed Gilen after learning of another transaction, whose customer eventually turned out to be Ramos.

Gilen was slapped with a nonbailable offense of drug pushing, while Ramos was charged with drug possession.

Ramos admitted he had been using drugs since he was 15, after his show biz career turned sour in the early 2000s.

“I turned to drugs because of the hardships of life and sadness. It was addictive,” he told reporters.

“But I already stopped last year. I already told myself, ‘Ayaw ko na,’” he said.

Ramos said he was supposed to wash clothes that night, but his body was aching and “kailangan ko ng pampalakas (I needed a power-up).”

“I endured it so long, but that night—I don’t know—I was tempted. Wala eh, nasa huli ang pagsisisi,” he said.

An emotional Ramos asked for forgiveness from his mother, who didn’t know he was using drugs.

He also told others who were planning to use illegal drugs: “Don’t you dare try drugs. If you still have a chance, stop it. Don’t waste your lives because of drugs.”

Ramos added that he had been suffering for so long.

The former actor assured that once he got out of detention and rehabilitation, he would be a renewed man.

During his childhood, Ramos starred in a number of shows and films, the most popular of which were “Tanging Yaman” (2000) and “Ang TV Movie: The Darna Adventure” (1996).

His last known appearance was on an episode of TV drama anthology “Tadhana” in 2017.

Eleazar said the arrest of Ramos was proof that the war on drugs  was not targeting the poor, emphasizing that people from all walks of life, even celebrities, could face drug charges.—WITH A REPORT FROM GABRIEL PABICO LALU