Sleepless nights aplenty by riversides as Mekong continues its rise 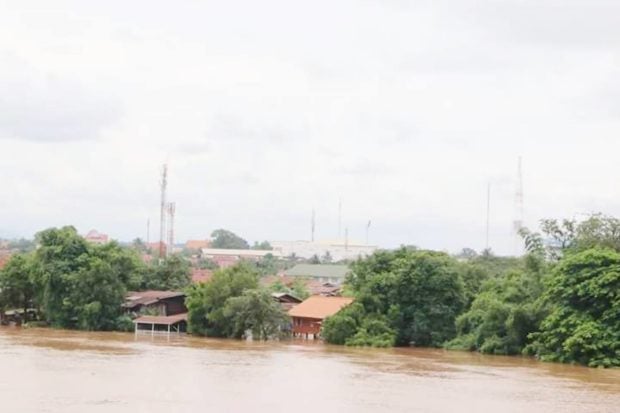 VIENTIANE — As floods waters continue to recede in Sanamxay district of Attapeu province in southern Laos, which was hit by the collapse of a dam last week, the swollen Mekong River flooded lowlands in some provinces this week.

Aid from the state, private businesses, international organizations and the public is flowing into Attapeu along National Road 13 South. But many people are also worried by the dramatic rise in the level of the Mekong in some provinces.

As rains have not stopped in many parts of the country, people with homes along the Mekong are living in fear. They are unable to sleep well as the level of the river is not receding.

People traveling along 13 South Road and the road in Borikhamxay province on Monday encountered flood waters in several stretches and had use a low gear to get their cars through the area.

In Khammuan, people were moved to higher ground as flooding has affected some communities, especially the residents of Xebangfay district located along the river of the same name, which is a tributary of the Mekong. Some areas in the plains of Savannakhet have also been submerged.

The Mekong began overflowing into low-lying areas when it reached 12 meters in the Champassak province after heavy rains. The local Champamay newspaper reported on Tuesday that the level of the Mekong in Pakxe was 12.68 meters.

According to an official from the province of Champassak, waters have entered some villages along rivers, including a tributary of the Mekong in Pakxe. Some parts of the riverside in Pakxe have been protected with sandbags.

According to the Ministry of Natural Resources and Environment’s Meteorology and Hydrology Department, the water level is expected to be 12.66 meters on Tuesday and 12.71 meters on Wednesdayin Pakxe district.

A few years ago too, residents of Pakxe experienced sleepless nights as the Mekong and its tributaries rose to danger levels after heavy rains.

However, those affected by the floods are not alone as the government, people, neighbouring countries and the international community has rushed aid to the victims.

Floods usually occur during the monsoon season, from August to the end of September, but in rare cases there have been floods in early June or July. Some communities located along the Mekong and other rivers will continue to be vulnerable to flooding if they have not built a protective bank like the one in Vientiane.

Floods are one of the biggest natural disasters affecting Laos but it is impossible to predict when they will occur. Flooding due to the Mekong and its tributaries and landslides every year affect vast stretches of rice fields, livestock and poultry, many roads, schools, houses and irrigation systems.