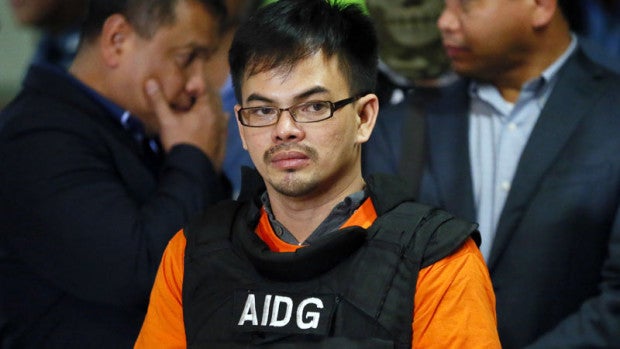 Alleged Filipino drug lord Kerwin Espinosa listens to a question as he is presented to the media upon arrival from Abu Dhabi in a file photo taken on Nov. 18, 2016 at Camp Crame in suburban Quezon city, northeast of Manila, Philippines. AP File Photo

Makati RTC Branch 64 Judge Gina M. Bibat-Palamos reset the arraignment to Aug. 29 after the lawyers of the accused said they would file a motion for reconsideration on the resolution of the panel.

Arraignment will again be at the session hall of the New Bilibid Prison (NBP) in Muntinlupa where Co is serving a penalty of reclusion perpetua for another drug case.

A similar case has been filed against the same accused before the Manila Court.

The complaint was filed by the PNP Criminal Investigation and Detection Group. It was junked on Dec. 20, 2017. Then Secretary Vitaliano Aguirre created a second panel to reinvestigate the case.

Navera explained that the second panel made a different finding since more pieces of evidence were presented during its preliminary investigation.

“There were evidence before that were not presented which were presented before our panel. So this actually changes the equation,” Navera said.

The DOJ stressed that contrary to the defense of Espinosa, who is already facing other drug cases before the Manila RTC, the confiscation or presence of the illegal drugs was not necessary to establish the criminal liabilities of respondents.

It explained that under R.A. 9165, conspiracy to commit illegal drug trading is an offense distinct from drug trading per se.

“In our resolution, which speaks for itself, we explained that the gravamen of the offense in conspiracy is the conspiracy itself– the agreement to engage in illegal drug trade. So there’s really no need to present the drug itself and this has been explained by the Supreme Court…so we just took it from there based on the prevailing doctrine regarding the offense of conspiracy,” Navera noted.

The panel also considered Espinosa’s confession, admitting that he traded in drugs in Region 7.

“Espinosa’s confession appears in the transcript of stenographic notes on the legislative investigation of the Senate Committees on Justice and Public Order,” Navera added. /jpv