On the ninth death anniversary of democracy icon Cory Aquino, her bereaved kin console themselves with the fact that she did not have to live through efforts by certain groups to gradually erase her hard-fought legacy.

“First, we miss her. But in a sense we’re glad she doesn’t have to see what’s happening to our beloved country these days,” said her son, former President Benigno Aquino III.

Aquino made the remarks to reporters at Manila Memorial Park, at the tomb of former President Cory and her husband, former Sen. Benigno “Ninoy” Aquino Jr., which had been bedecked with yellow chrysanthemums.

The renewed spotlight on Cory’s role in ushering the return of democracy, after years of dictatorial rule of Ferdinand Marcos, seemed to be the perfect foil amid an alleged backslide toward tyranny under President Rodrigo Duterte. 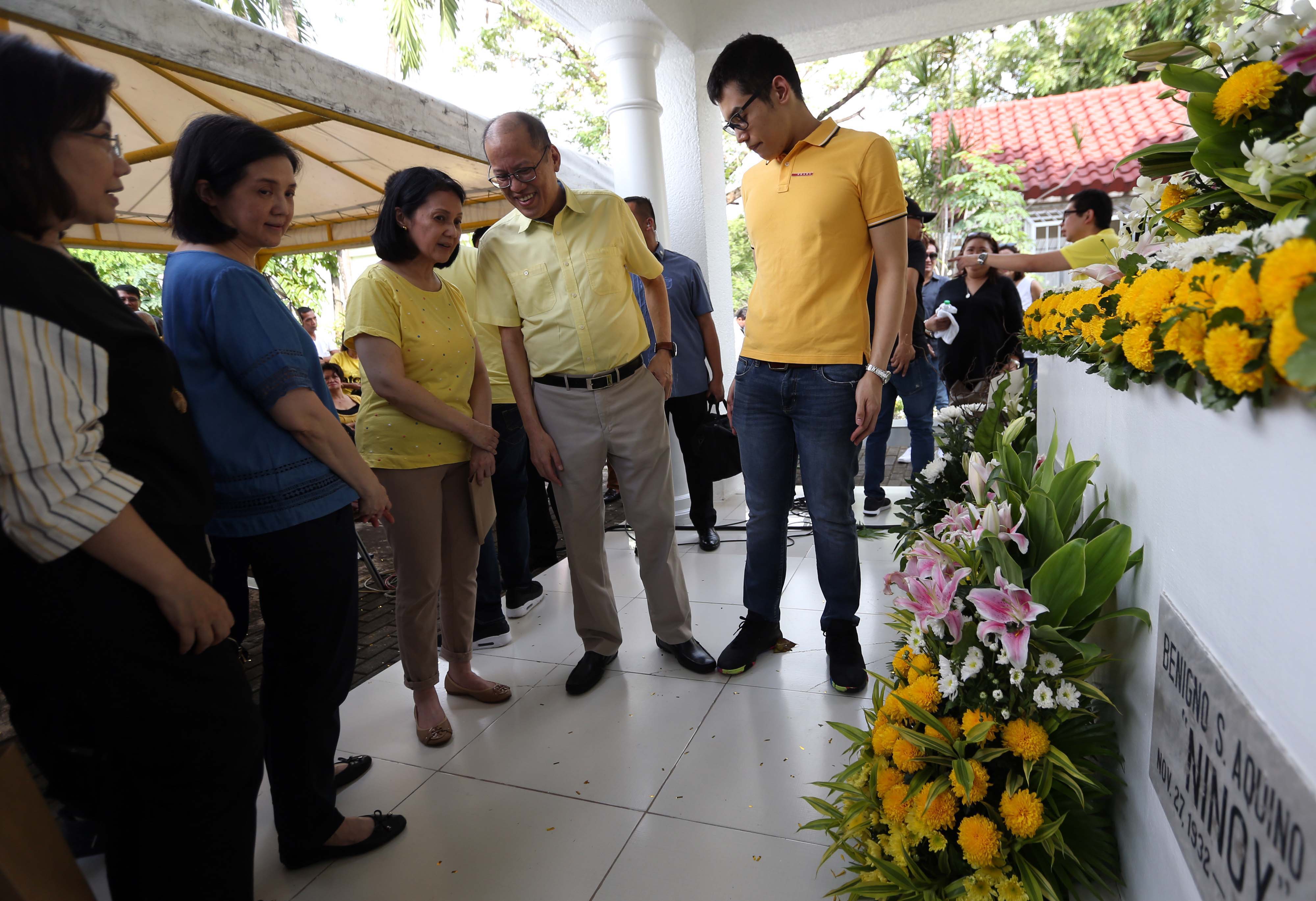 The younger Aquino said his mother was “nourishing,” but the assassination of Ninoy and her swift rise to the presidency forced her to take on dual roles as “both mother and father to all of us.”

“I think that really helped us to grow, understand our condition, and really fortify our spirits for all the struggles we had to undergo,” he added.

Aquino was the latest on Wednesday to add his voice to the chorus of denunciations against the President’s penchant for “recycling” officials he had already sacked.

“When you remove someone from their position, it means loss of trust and confidence [on the appointee],” Aquino said. “If you place them in another position, can that be? In another capacity, you can suddenly trust them again?”

But Aquino showed no appetite for staging a political comeback when asked about his plans for the 2019 elections.

“People have been asking me, won’t I run? I said, if I run, they’ll throw everything [at me] including the kitchen sink, [even] the house where it’s attached,” quipped Aquino, before adding that he still had “a lot of supporters.”

Read Next
Prosecutor orders release of students, journalists, 14 other protesters
EDITORS' PICK
Cebu City closes its borders
Style and music journeys with Claudia Barretto
BREAKING: 1,075 people in PH has coronavirus disease – DOH
IATF: Food firms to operate with 50% of workforce during Luzon quarantine
DILG to stranded workers: ‘Stay where you are’ until Luzon-wide quarantine is over
UP-PGH wards for COVID-19 patients finished in 5 days
MOST READ
Tootsy Angara bares neighbor wanted them out of village
Pacquiao to seek probe on leaked private letter from Barangay Dasmariñas
Toyota Makati, Inc. employee tests positive for COVID-19
Another doctor dies due to COVID-19 in Cebu City, doctor-husband critical
Don't miss out on the latest news and information.

PNP chief says no to detention of curfew violators