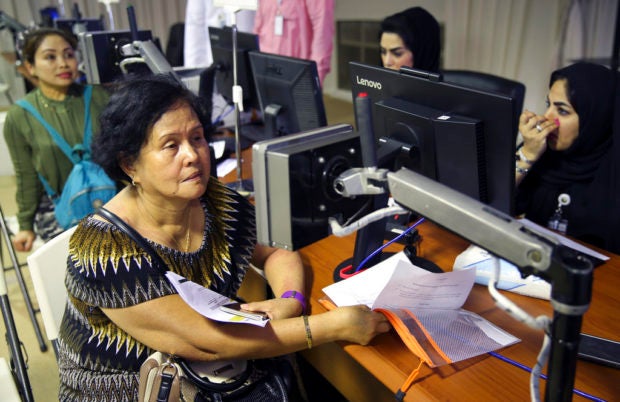 Filipino workers have their eyes scanned at a visa processing center in Al Aweer, about 30 kms, 18.6 miles, east of Dubai, United Arab Emirates on Aug. 1, 2018. AP

DUBAI, United Arab Emirates (AP) — The United Arab Emirates launched a three-month visa amnesty program Wednesday, hoping to resolve a Catch-22 for foreign workers who are fined daily for overstaying their permits but prevented from leaving until they pay the penalties.

The government isn’t releasing specific numbers, but said it expects “thousands” of people, primarily laborers from countries like Bangladesh, Sri Lanka, Pakistan, Nepal and the Philippines, to take advantage of the amnesty through the end of October.

“No one will stay at home while there’s a good chance to solve their problems,” predicted Maj. Gen. Mohammed Ahmed Al Marri, the director of Dubai’s office for residency and foreigner affairs.

Of the UAE’s estimated population of more than 9 million people, only about 12 percent are Emiratis.

As it stands, foreigners who overstay their visas are fined between 25 to 100 dirham (about $7 to $27) a day, depending on the type of visa, and aren’t allowed to leave the country until the fines are paid. As the fines mount over months and years, their prospects of payment become slimmer and slimmer, leaving them in limbo.

In Dubai, officials have said more than 25,000 people overstayed their residency visas in 2017 alone.

“These are not criminals,” Al Marri said. “We are here to support and help these people to start over again and start working.”
Centers were set up around the country to process applicants, with consular officials from many countries also on hand to help deal with passport and other issues.

Hundreds showed up at two massive air-conditioned tents set up on the outskirts of Dubai for the first day of the program. It’s the fifth general amnesty since 1996, and more than 60,000 people took advantage of the last one, in 2013.

Under the program, all fines for overstaying visas will be forgiven and people will be allowed to return to the UAE with new visas without preconditions — a nod to the country’s need for foreign workers. People can also get six-month temporary visas to stay in the country and look for work.

Foreigners from war-torn countries such as Syria and Yemen qualify for a one-year residence visa without restrictions.
“It’s a gift from the government of the UAE as a humanitarian gesture,” Al Marri said. /ee