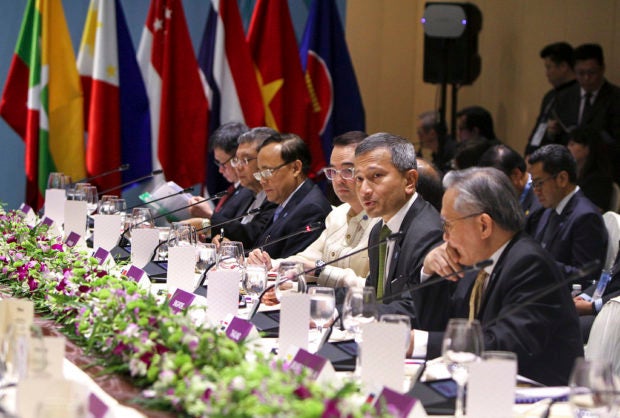 In this photo released by the Asean Organizing Committee, Singapore Foreign Minister Vivian Balakrishnan (second from right) speaks during a meeting by the Asean foreign ministers with members of the ASEAN Intergovernmental Commission on Human Rights on Aug. 1, 2018, in Singapore. AP

SINGAPORE — Southeast Asian nations are expected to welcome an initial negotiating draft of a nonaggression pact with China on the South China Sea, but critics warn that the protracted talks provide a diplomatic cover for Beijing’s tenacious aggression in the disputed waters.

Top diplomats of the Association of Southeast Asian Nations will also praise the rapprochement between the Koreas, along with that of President Donald Trump and North Korean leader Kim Jong Un, when they gather for four days of annual summitry in Singapore starting Wednesday.

Currently led by Singapore, the 10-nation bloc will host on Saturday Asia’s largest security forum, including the key players involved in the Korean Peninsula’s disarmament efforts, which will provide a chance for them to talk on the summit’s sidelines.

Concern over rising extremism in the region and the plight of minority Rohingya Muslims in Myanmar’s Rakhine state will also be under the spotlight. Myanmar is to brief the Asean foreign ministers on the situation in Rakhine during a lunch “retreat,” an informal gathering where ministers raise contentious issues that normally are a taboo in their staid plenary meetings.

Founded in 1967 in the Cold War era as a bulwark against communism, Asean has a bedrock principle of non-interference in each other’s domestic affairs and decides by consensus, meaning even one member state can doom any proposal it deems offensive.

Those cardinal principles have drastically slowed decision-making and have been used by authoritarian leaders to dodge outside criticism, causing the diplomatic collective to be labeled by skeptics as a “club of dictators” and human rights violators. But its principles have allowed Asean to maintain diverse national identities, from rambunctious democracies to martial law regimes, for half a century.

The bloc has also been an acceptable broker for talks for all sorts of conflicts.

In the South China Sea disputes, which have pitted China, Taiwan and four Asean member states — Brunei, Malaysia, the Philippines and Vietnam — the group is expected to announce an agreement with Beijing on an initial negotiating draft of a so-called “code of conduct,” a proposed set of regional norms and rules aimed at preventing the long-seething disputes from degenerating into a shooting war.

Philippine Foreign Secretary Alan Peter Cayetano said Tuesday before flying to Singapore that talks on the code could be concluded this year or next. Other Asian diplomats have not been as optimistic.

The ministers will welcome “the improving cooperation between Asean and China and were encouraged by the progress of the substantive negotiations towards the early conclusion of an effective code of conduct in the South China Sea on a mutually agreed timeline,” according to a draft of a joint post-summit communique by the ministers which was obtained by The Associated Press.

Some of the ministers would repeat their concerns over China’s transformation of seven disputed reefs into islands, including three with runways, which now resemble small cities armed with weapons, including surface-to-air missiles. China has come under intense criticisms for the aggressive action but it has said it has the right to build on its territory and defend them at all costs.

The ministers “took note of the concerns expressed by some countries on the land reclamations in the area, which have eroded trust and confidence, increased tensions and may undermine peace, security and stability in the region,” the draft communique said without naming China and reflecting the internal divisions over the touchy issue.

Asean member states Cambodia and Laos, which are known China allies, have opposed the use of strong language against Beijing over the disputes.

Greg Poling, director of the US-based Asia Maritime Transparency Initiative, which monitors developments in the South China Sea, said highlighting the draft code of conduct in the summit will be “more political theater than substance at this point” given the lack of agreement on areas it will cover and whether the pact should be legally binding after more than 15 years of talks.

Without any major concessions, especially from China, Poling said the talks would drag further while China presses actions to reinforce its vast territorial claims “without paying much price because the code of conduct process offers diplomatic cover to claim it is seeking a peaceful and fair settlement.” /ee