Orca carries dead calf for a week during ‘deep grieving’ 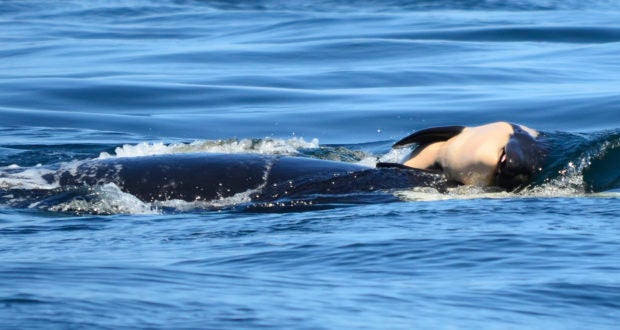 In this photo taken Tuesday, July 24, 2018, provided by the Center for Whale Research, a baby orca whale (right) is being pushed by her mother after being born off the Canada coast near Victoria, British Columbia. The new orca died soon after being born. Ken Balcomb with the Center for Whale Research says the dead calf was seen Tuesday being pushed to the surface by her mother just a half hour after it was spotted alive. Balcomb says the mother was observed propping the newborn on her forehead and trying to keep it near the surface of the water. AP

SEATTLE, United States — An endangered orca that spends time in Pacific Northwest waters is still carrying the corpse of her calf one week after it died.

Experts with the Whale Museum on San Juan Island have been monitoring the 20-year-old whale, known as J35, since her calf died shortly after birth Tuesday. For days now, the whale has been balancing the dead calf on her forehead or pushing it to the surface of the water.

Atkinson says the orca and her pod are going through “a deep grieving process.”

The calf was the first in three years to be born to the dwindling population of endangered southern resident killer whales. There are only 75. /cbb