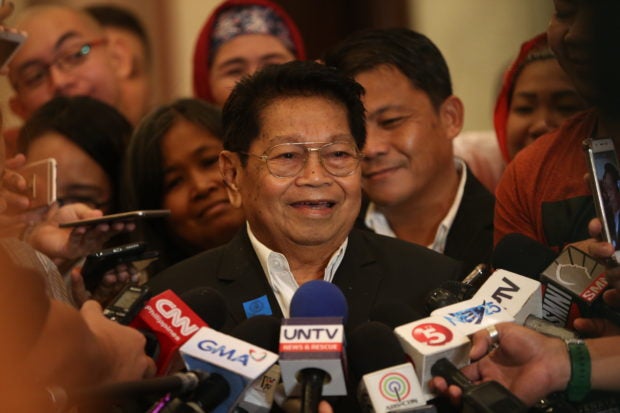 A Cotabato City think tank has advised against too much rejoicing over the enactment of the Bangsamoro Organic Law (BOL), saying the charter of a proposed new autonomous region for Muslims in Mindanao still needs to clear a plebiscite and beat a possible legal challenge.

President Rodrigo Duterte last week signed the BOL, a key step to ending a Muslim rebellion in the south that had claimed more than 150,000 lives since the 1970s.

Their leaders are seeking support for the law ahead of a plebiscite on the measure, which establishes an expanded autonomous region for Muslims in Mindanao and is aimed at ending one of Asia’s longest and deadliest conflicts.

“This is our dream. If we end this [fighting], hopefully we can live in peace,” Nasser Samama, a 61-year-old veteran rebel fighter, said inside the MILF’s headquarters in Camp Darapanan.

The BARMM will have more powers and cover a bigger area.

Last week’s signing of the BOL was met with rejoicing in Mindanao.

But on Sunday lawyer Benedicto Bacani, executive director of the Institute for Autonomy and Governance, cautioned against too much excitement about the BOL, citing the challenges facing the measure.

“The initial challenges [for the BOL] is to hurdle [possible] constitutional challenges and for its ratification in the plebiscite,” Bacani said.

He stressed that the charter for the BARMM must first be ratified by the people in the proposed expanded Muslim autonomous region.

The BOL provides that a plebiscite will be held three to five months after the law is approved to legalize the creation of the BARMM.

Besides the ARMM, which encompasses the provinces of Maguindanao, Lanao del Sur, Basilan, Sulu and Tawi-Tawi, the plebiscite will be held in 39 villages in North Cotabato, six towns in Lanao del Norte, and the cities of Cotabato and Isabela.

But the BOL may not get that far before the Philippine Constitution Association and the group of former Sulu Gov. Abdusakur Tan question the constitutionality of the law in the Supreme Court.

Bacani said one of the constitutional issues the two groups may raise could be the parliamentary system of government.

The 1987 Constitution provides for a presidential system of government for all of the Philippines.

While the BARMM would be an integral part of the Philippines, the region would have a parliamentary government that some people see as putting it parallel to the national government, effectively making it a state within a state.

Resolving a challenge could take years.

But once the Bangsamoro Transition Authority (BTA) and the BARMM are in place, Bacani said the two entities should ensure that peace dividends and better security must be felt in the communities.

In interview with Radyo Inquirer 990 AM on Sunday, Bangsamoro Transition Commission Chair Ghadzali Jaafar gave assurance that the regional government would be upright.

“[W]e give our assurance that this government is different from the Autonomous Region in Muslim Mindanao,” Jaafar said, without elaborating.

Office of the Presidential Adviser on the Peace Process Undersecretary Nabil Tan described the BOL as “an inclusive law that will provide equal protection to all constituents in the region and not just one sector.” —With reports from Faye Orellana and AFP