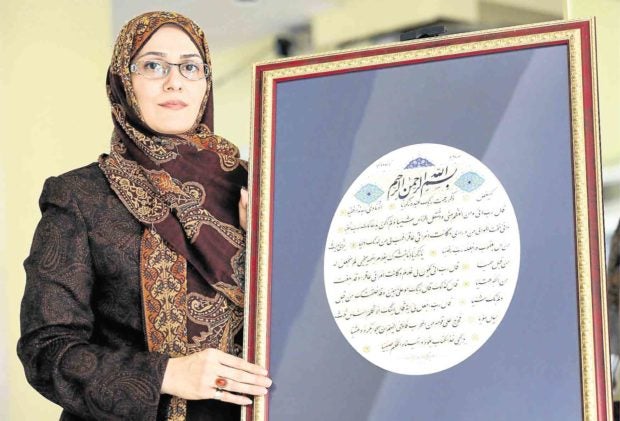 POETIC LINES Iranian artist Tandis Taghavi holds one of her works at her exhibit in Manila early this month. Taghavi uses “nastaliq” calligraphy, which is considered both a style of geometric art and a form of meditation. —LYN RILLON

Interfaith dialogue through art is something that Muslim Iranian calligrapher Tandis Taghavi, 45, has always believed in.

Using the Persian writing style called “nastaliq,” characterized by the downward slope of letters from right to left, Taghavi wrote verses from the Quran’s 19th chapter, “Maryam” or “Mary,” and dedicated the artwork to Filipino Christians to highlight the commonalities between Islam and Christianity.

“I have been writing calligraphy artworks from the Quran. But when I reached the chapter ‘Maryam,’ I felt that the story was especially [written] for the Philippines,” Taghavi told the Inquirer.

In both Christian and Islamic beliefs, Mary is viewed as the “blessed virgin” who gave birth to the child Jesus.

Some of Taghavi’s artworks were showcased on the first day of the 117th plenary assembly of the Catholic Bishops’ Conference of the Philippines (CBCP) in July, at Pope Pius XII Catholic Center in Manila.

Eight panels of the artist’s calligraphy works from the chapter “Maryam” were presented in the exhibit, along with eight other panels of verses from different chapters of the Quran that have similarities with the Torah and the Gospel of Luke.

One artwork, a verse on Mary that Taghavi did in gold, was presented as a gift to Manila Archbishop Cardinal Luis Antonio Tagle. The verse from the third chapter of the Quran, “Al-Imran,” goes:  “The angels said, ‘Mary, God gives you news of a Word from Him, whose name will be the Messiah, Jesus, son of Mary, who will be held in honor in this world and the hereafter, who will be one of those brought near to Allah (God).”

In a message, CBCP president and Davao Archbishop Romulo Valles said the CBCP was “hopeful that this generous gesture of the Iranian people would promote interfaith dialogue toward peace with their Muslim brothers and sisters.” 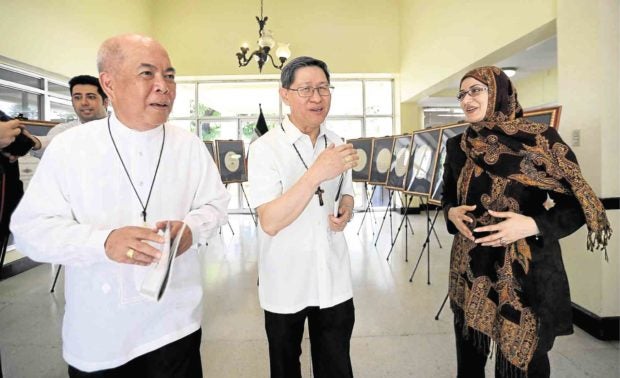 Taghavi apparently shares the same hope. “I want to make the public see our similarities and somehow prove to everyone that Islam means peace,” she said. “Art is not limited to art alone. It extends to our duties in life.”

She also recalled that in one of her past exhibits in Metro Manila, even non-Muslims appreciated her work even though they did not have any knowledge of Arabic or Persian words.  Their positive feedback really encouraged her to continue to create artworks, she said.

But aside from aspiring to please her audience, the artist said geometry was an important factor in her art as it determined the changes in her calligraphy’s font styles.

“There is always a scientific approach in doing the artwork,” said Taghavi, who is married to the cultural counselor of the Iranian Embassy in Manila and has two teenage daughters.

The artist, who began doing her art when she was 8 years old, has been in the Philippines for only one and a half years but already had about 10 art exhibitions in Metro Manila.

Not wanting to miss any opportunity to practice her art, Taghavi brought writing materials from Iran like bamboo and “qalam,” or reed pens, and became an art instructor in Manila.

“Calligraphy, which is an ancient method, also forms our national identity as Iranians … It makes the Quranic verses attractive so that memorizing the Quran will be easier for Muslims,” she said.

Pursuing her art had not always been easy for her, said Taghavi, recounting how she would keep herself inside her room for hours to contemplate before beginning to write.

“There were times when I did not notice who had entered my room and could not understand what was going on around me,” she recalled.

There were difficulties doing her art as well when she got married because of her responsibilities as a wife and a mother, she said.

“Sometimes I practice and create my artworks from midnight to 2 a.m. These are the few hours that I give  myself so I can do my work without any disturbance. Then I wake up early in the morning for other duties,” the artist said.

Despite that, she found the secrets to success, said Taghavi: “Sacrificing, directly facing challenges and turning problems into opportunities.”

She has also been dedicating her artwork “to the martyrs all over the world, not only in the Middle East,” Taghavi said. “I am inspired by their sacrifices.”