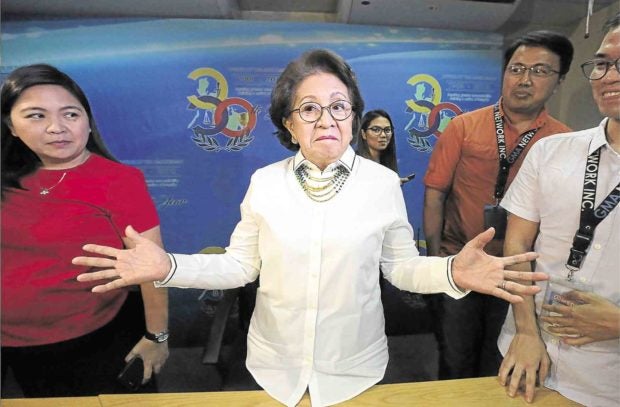 Press freedom in the Philippines has been on a “downslide” since President Rodrigo Duterte was sworn into office two years ago, former Ombudsman Conchita Carpio-Morales said on Friday.

Morales made the caustic remarks barely a day after relinquishing her post at the Office of the Ombudsman, courting a possible equally lurid retort from Mr. Duterte, who had crossed swords with her after she spoke against the spiraling drug killings in the country.

The President had also threatened to impeach her as he accused Morales of being part of a “conspiracy” to unseat him.

Fielding questions from members of the Foreign Correspondents’ Association of the Philippines, Morales said she was looking forward to a much-deserved vacation after ending her decades-long career in the government with a seven-year stint as the country’s top graft buster.

But the retired Supreme Court associate justice made sure she won’t be leaving public service without a bang.

Asked about her views on the situation of the media under the Duterte administration, Morales replied: “If you look at the way Rappler was treated, then press freedom seems to be on a downslide.”

“I particularly cited [the] case of Rappler because Rappler has ceased to be… an online (media) practitioner,” she said.

The former Ombudsman apparently mistook that the decision of the Securities and Exchange Commission (SEC) in January to revoke Rappler’s certificate of incorporation had completely shut down the online news website’s operations.

On Thursday, the Court of Appeals upheld the SEC’s conclusion that Rappler violated the constitutional restriction against foreign ownership of media entities in the Philippines.

The tough-talking President had been adverse to media organizations he viewed to be critical of his administration, branding them as bearer of “fake news” aimed at undermining the government.

Morales also made known that she was not afraid of facing criminal charges after her return to private life.

“Since I’m already outside the government, the government has ceased to have administrative jurisdiction over me. But criminal complaints can still be filed against me,” she said.

“That’s not surprising if they do. But as I have said, I’m ready,” said Morales in her usual feisty tone, eliciting giggles from reporters. /jpv