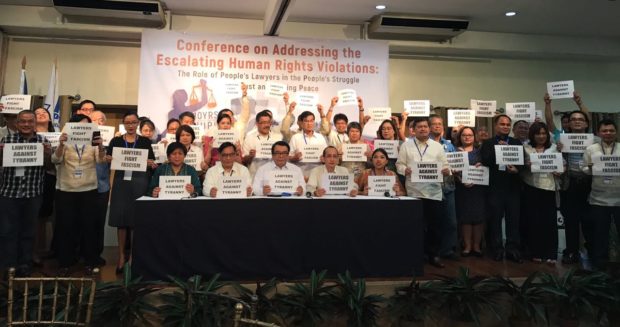 In this file photo, members of the National Union of Peoples’ Lawyers (NUPL) sign a manifestation against escalating human-rights violations in the country and vowed to continue services for the poor and for peace. INQUIRER.net file photo / TETCH TORRES-TUPAS

The National Union of Peoples’ Lawyers (NUPL) has sued the military and several local officials in South Cotabato for the 2017 alleged murder of indigenous peoples (IP) in Lake Sebu.

In a complaint filed before the Department of Justice (DOJ), the NUPL disclosed that seven have died, while two were injured in a “massacre” happened in Sitio Datal Bonglangon, Barangay Ned, Lake Sebu on December 3, 2017.

According to earlier media reports, the Lumads were planting crops when soldiers came and started shooting at 12 noon.

The Armed Forces of the Philippines (AFP) previously claimed that the victims of the encounter were alleged members of the New People’s Army (NPA), which the NUPL vehemently denied.

Several locals also believed that the community was attacked to pressure the residents to give up their ownership of the land.

In their three-page complaint, the NUPL said their clients, who were the relatives of the slain victims, have attempted to evacuate to Manila due to the implementation of martial law. Carol Balita, INQUIRER.net intern / jpv