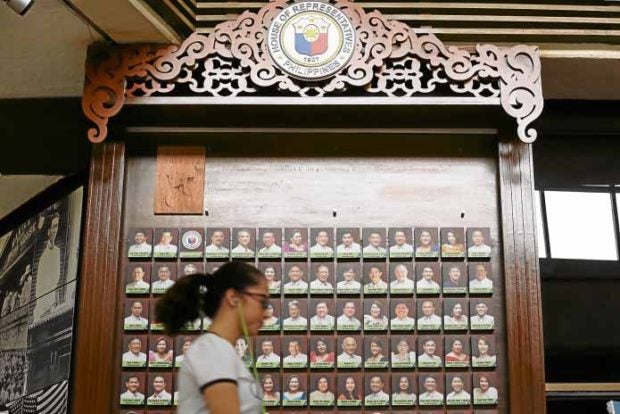 ALVAREZ PICTURE MISSING The portrait of Rep. Pantaleon Alvarez and his message have been
removed from the board displaying members of the House of Representatives after he lost the
speakership fight to Rep. Gloria Macapagal-Arroyo. —NIÑO JESUS ORBETA

The ruling Partido Demokratiko Pilipino-Lakas ng Bayan (PDP-Laban) remains “intact,” but any member who wants to jump ship is free to go, according to Sen. Aquilino Pimentel III, the party president.

As of Thursday, nobody had signified their intention to leave the party, but they would not be forced to stay, Pimentel said when asked about reports that PDP-Laban members affiliated with Speaker Gloria Macapagal-Arroyo were planning to desert.

Arroyo replaced Davao del Norte Rep. Pantaleon Alvarez as Speaker on Monday in a dustup over leadership that played out in the presence of foreign diplomats and other dignitaries who were in the House of Representatives to listen to President Duterte’s State of the Nation Address (Sona) to a joint session of Congress.

There was talk, however, that the President was actually behind the ouster of Alvarez, which Malacañang belied on Thursday.

“The President did not interfere, and this was purely a decision of the members of the House of Representatives,” presidential spokesperson Harry Roque told reporters in Ipil, Zamboanga Sibugay.

Roque dared congressmen to state publicly that Mr. Duterte was involved in the leadership row.

“I challenge any congressman to publicly say that the President called them to vote for a particular candidate, because the President did not do that,” he said.

Alvarez, a longtime ally of the President, is the PDP-Laban secretary general, while Arroyo is a fairly recent member of the ruling party.

Arroyo’s original party, Kabalikat ng Mamamayang Pilipino (Kampi), is moribund and the Lakas-NUCD vehicle that she rode as President was gutted by turncoats when she stepped down in 2010.

There is no law against turncoatism in the Philippines so that small parties like the Liberal Party (LP) and PDP-Laban, which had only a handful of members until Benigno Aquino III and Rodrigo Duterte captured Malacañang in 2010 and 2016, respectively.

Turncoats left the LP desolate in 2016 and now that Arroyo is back as fourth in the line of succession—unlikely, according to the reports, to have no   plans under a long-standing proposal for a change to the parliamentary system—PDP-Laban could be next.

Pimentel, however, said nothing had happened to the party despite the convulsion in the House.

But Pimentel acknowledged sadness and disappointment at how Alvarez and Arroyo fought over the House leadership.

The two could have hashed out their leadership fight within the party, he said.

But at least, he said, the speakership is still held by a PDP-Laban member, though there are mixed emotions because another member of the party has been removed from the top House post.

Alvarez will not be replaced as PDP-Laban secretary general, Pimentel said. So far, there has been no talk of sanctions, though he added that he had yet to talk to Alvarez.

Senate Minority Leader Franklin Drilon said the power struggle in the House was a “sign of lack of any decent political party system in our country.”

Drilon said there was a need to reform the political party system to put a stop to turncoatism and to ensure that people belonged to a party because of ideological commitment, not opportunity.

He said what happened in the House of Representatives was all about local politics, not any policy issue. — WITH A REPORT FROM JULIE M. AURELIO