newsinfo / Nation
Nation
WHAT WENT BEFORE 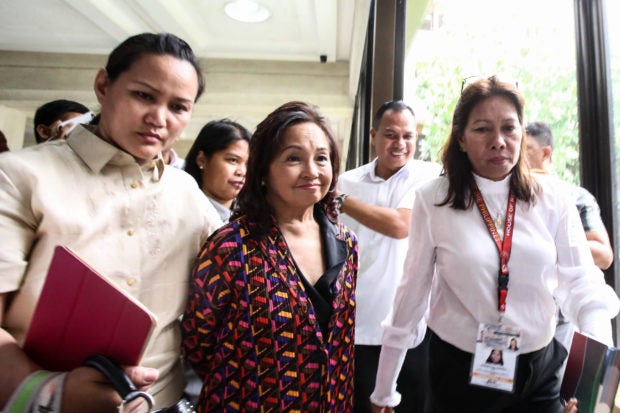 The new house speaker Gloria Macapagal Arroyo after her meeting with the PDP-Laban and the former house speaker Pantaleon Alvarez at the House of Representatives. INQUIRER PHOTO/JAM STA ROSA

Scandals have hounded virtually every Philippine leader and their family members. Except for the late dictator Ferdinand Marcos, no one had to deal with as many allegations of wrongdoing or impropriety as former President Gloria Macapagal-Arroyo.

Using her presidential powers and executive privileges that shielded her Cabinet and military officers from congressional investigations, Arroyo survived them all.

Sen. Panfilo Lacson accused Arroyo’s husband, Mike Arroyo, of amassing more than P200 million from election campaign contributions and deposited the money in secret bank accounts, some under the name of “Jose Pidal.”

Mike Arroyo’s brother, Ignacio, claimed he owned the Pidal accounts but invoked his right to privacy.

The $503-million NorthRail project was intended to transport passengers between Caloocan City and Malolos, Bulacan, in 30 minutes.

An expert said NorthRail was simply an upgrading of the old Philippine National Railways (PNR) system and the performance of its diesel-powered trains was inferior to the electric-powered trains of the LRT or MRT.

Sen. Franklin Drilon said the project was “the greatest train robbery in history.” In April 2009, Arroyo approved an additional $317 million for the project.

The project was canceled in 2012 after the Supreme Court ruled that it was illegal for lack of competitive bidding.

Senator Lacson accused Arroyo of “virtual vote-buying,” saying she authorized the release of P728 million to favored officials to buy fertilizers and pesticides for their constituents even though it was harvest season.

The Senate agriculture and blue ribbon committees concluded that Arroyo should be “held accountable” for mismanaging the fund. The Commission on Audit said the fertilizers were overpriced by 682 percent.

The blue ribbon committee recommended the filing of plunder and other charges against Agriculture Undersecretary Jocelyn Bolante and nine others, who denied the charges.

Arroyo and then Election Commissioner Virgilio Garcillano allegedly conspired to rig the 2004 presidential election. Parts of their telephone conversations had been recorded and leaked to the public as the “Hello, Garci” tapes.

Arroyo apologized on national television for “lapses,” saying “I am sorry,” but did not admit rigging the polls. Congress held inquiries and street protests erupted. Several of her key Cabinet members later resigned.

Then National Security Adviser Norberto Gonzales and US lobby firm Venable LLP signed an agreement to help the administration seek US funding for the Philippines’ shift to a parliamentary system.

Arroyo scrapped the deal because it “became unnecessarily controversial.”

Two “bagmen” and an operator of the numbers racket, “jueteng,” told the Inquirer they had given protection money to Arroyo’s husband and his son, Rep. Juan Miguel “Mikey” Arroyo.

Sandra Cam, Richard Garcia and Demosthenes Abraham Riva testified in the Senate that Mike Arroyo, Mikey Arroyo and Iggy Arroyo had been receiving payola from jueteng operations in Bicol. The Arroyos denied the allegations. Witnesses Garcia and Riva later retracted their testimonies.

De Venecia and former government consultant Rodolfo “Jun” Lozada claimed that Arroyo’s husband and then Commission on Elections Chair Benjamin Abalos were involved in bribery to get the project approved. Both denied any wrongdoing.

Malacañang scrapped the deal. Abalos resigned from the Comelec and was later charged with graft but was acquitted.

Arroyo had breakfast with over 100 congressmen and around 200 local officials in October 2007. They left Malacañang carrying paper bags containing between P200,000 and P500,000.

Arroyo’s Kampi party and the League of Provinces of the Philippines said the money came from them to fund projects and help their members, and that the President knew nothing about it.

Former Speaker Jose de Venecia said the money was a bribe to quash an impeachment case against Arroyo.

The World Bank held back a $232-million loan for road projects after bid rigging was uncovered, blacklisting seven companies.

Senator Lacson said witnesses quoted in a World Bank report implicated Mike Arroyo and others. The bank said the report was “strictly confidential.”

The SouthRail project that was to be funded by a $932-million loan from China was supposed to link Laguna to Bicol provinces through a high-speed train.

Lozada said the project was overpriced by 22 percent.

The government eventually funded the entire project in 2008, allotting P1.5 billion for its two phases, but work has been pushed back because of delays in disbursements.

Arroyo’s arrest warrant was served to her while she was at St. Luke’s Medical Center in Taguig City. The Pasay Regional Trial Court allowed her to post a P1-million bail and ordered her release in March 2015. The case is still pending.

Voting 11-4, the Supreme Court dismissed the plunder charge filed in 2012 against Arroyo and ordered her release.

The charge stemmed from the alleged misuse of P366 million from the Philippine Charity Sweepstakes Office.

Arroyo, who had cervical spine ailment, was detained at Veterans Memorial Medical Center in Quezon City from October 2012 to July 2016.

The Ombudsman dismissed the criminal complaint against Arroyo, Executive Secretary Eduardo Ermita, and two Department of Agrarian Reform personnel for “insufficiency of evidence” in the alleged misuse of P900 million from the Malampaya Fund.

The National Bureau of Investigation, which initiated the case in 2013, found that Arroyo’s order had paved the way for the funding of what turned out to be ghost projects by nongovernment organizations.