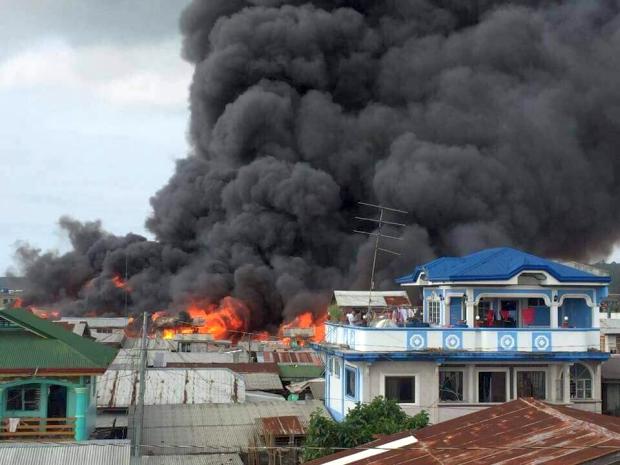 A view of the fire that started on Tuesday afternoon, July 25, 2018, in Jolo, Sulu and took hours to put out. (Photo from the Department of Social Welfare and Development – ARMM)

ZAMBOANGA CITY – At least eight people, two of them children, were injured, and more than 30,000 residents were left homeless when a huge fire gutted down almost 3,000 homes in three barangays – Lambayong, Busbus and Walled City in Jolo, Sulu on Tuesday.

Gov. Mujiv Hataman of the Autonomous Region in Muslim Mindanao (ARMM) visited the fire scene on Wednesday, describing it as one big disaster that would require immediate intervention both from government and private sectors.

“Our aerial assessment showed over ten thousand hectares have been eaten by fire,” Hataman said in a telephone interview. “The poor displaced families need all the help now. Initially, we distributed 25 kilos of rice for each family and some cash for their temporary subsistence, our people need clothing, medicines, blankets, food.”

The Bureau of Fire Protection is still looking into the cause of the fire, which some sectors claimed to have started in two places along the coastlines of Lambayong and Walled City before it spread towards Busbus.

ARMM said 2,600 homes were razed to the ground as the fire was finally put out on Wednesday, July 25.

Supt. Salbino Piad, chief of the Provincial MaritimePolice in Sulu, said the fire around 3 p.m. on Tuesday in Walled City, about 300 meters away from ARMM’s regional maritime unit.

Firefighters could not immediately put off the blaze due to strong winds, leaving more resident homeless, many of them forced to seek temporary shelter in nearby schools, gymnasium and multipurpose halls in the town of Jolo.

Fatima Isnani, 60, said it was the “biggest fire since 1974. My elderly parents were all crying in fear. We thought, war is looming, and I wonder why it took more than 10 hours before they can put off the fire.”

“[I pray that] this is not orchestrated,” Isnani added. “Right now, I cannot even imagine how two fires sparked at the same time in two opposite barangays.”

He said the regional government has been reaching out to close to 5,000 families affected. /atm