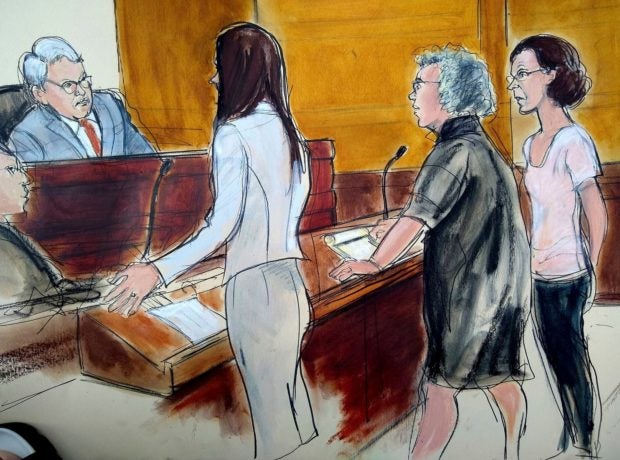 In this courtroom drawing, Clare Bronfman, right, is arraigned at federal court in New York, Tuesday, July 24, 2018. Bronfman, a daughter of the late billionaire philanthropist and former Seagram chairman Edgar Bronfman Sr., and three other people associated with the NXIVM organization were taken into custody and charged with racketeering conspiracy, the U.S. attorney’s office in the Brooklyn borough of New York announced. From left is Judge Nicholas Garaufis, Assistant US Attorney Moira Penza, defense attorney Cassidy Necheles and Bronfman. (AP Photo/Elizabeth Williams)

New York, United States – An American heiress to a liquor fortune was arrested and charged Tuesday in connection with a secretive society of women sex slaves, before being released on a $100 million bond, US prosecutors said.

Clare Bronfman, 39, a philanthropist and former equestrian show jumper, is the daughter of Edgar Bronfman, the late Canadian chairman of liquor giant Seagram whose net worth was estimated at $2.6 billion.

Bronfman appeared before a judge in Brooklyn, New York and was released with an ankle bracelet after prosecutors argued she was a flight risk.

She was a member of the executive board of Nxivm, a purported self-help group accused of presiding over a secretive society of women sex slaves that shot to notoriety for its initiation rites branding them with the founder’s initials.

Her lawyer, Susan Necheles, said her client “did nothing wrong.”

“Nxivm was not a criminal enterprise but instead was an organization that helped thousands of people,” she added in a statement.

Raniere, who was arrested in Mexico in March, is accused of creating a secret society called “DOS” – a pyramid scheme of women “slaves” and “masters” with him – the sole man – at the top.

Prosecutors had branded Bronfman an “extraordinarily high” flight risk owing to her vast wealth, access to a private jet, ownership stake in a private island in Fiji, and because her mother and sister live overseas.

Allison Mack, a television actress, was also arrested in April on sex trafficking charges for allegedly recruiting women to the purported mentorship group, whom US prosecutors said were forced to have sex with its leader.

Members were allegedly treated as slaves – branded with Raniere’s initials while being pinned down naked and filmed at initiation ceremonies.

Some were forced onto low-calorie diets as Raniere preferred exceptionally thin women, and none were allowed to sleep with anyone but him, prosecutors said.                        /kga