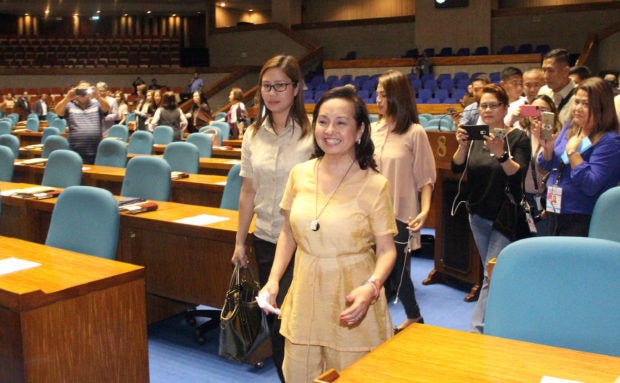 FIRST DAY AS SPEAKER A smiling Rep. Gloria Macapagal-Arroyo arrives at the Plenary Session Hall of Batasang Pambansa on Tuesday, her first day as Speaker. She was elected on Monday night to the top House position, replacing Rep. Pantaleon Alvarez. —CONTRIBUTED PHOTO

Critics of former President Gloria Macapagal-Arroyo on Tuesday slammed her election as Speaker of the House of Representatives, warning it might be part of a plan to put her back at the top as prime minister.

Sen. Panfilo Lacson described the coup that Arroyo and her allies carried out on Monday to topple Davao del Norte Rep. Pantaleon Alvarez from the top post in the House as “awkward, ugly, low and disgraceful.”

Lacson called Arroyo’s election as Speaker an argument against moves for a shift to the parliamentary system.

“Regardless of whether it was Representative Arroyo or somebody else replacing the ousted Speaker, what happened yesterday is a strong argument against a parliamentary form of government where patronage politics plays a major, if not the only, role in selecting our country’s top leader,” he said.

If there is a plot to make Arroyo prime minister, those behind it should rethink what they are hatching as the Senate would not allow it, said Lacson, who had exposed alleged corruption involving Arroyo’s husband when she was President.

A representative of Pampanga province, Arroyo, 71, who was President from 2001 to 2010 and was detained for five years for alleged graft, was sworn in as the first female Speaker of the House late on Monday after receiving the support of 184 congressmen, with 48 against and 12 abstentions.

Also a former senator, Arroyo was accused of rigging elections and her administration was plagued by allegations of graft involving Chinese companies, which she denied.

The Supreme Court in 2016 dismissed plunder charges against her and ordered her release from hospital detention, throughout which she still held her seat in the House.

Mayor Duterte congratulated Arroyo in a text message on Tuesday, praising the Pampanga lawmaker as “a strong leader.”

Sen. Grace Poe warned that in the proposed parliamentary government, the leader of Congress would be nearly as powerful as the President.

“So let us say the Speaker now would be the Speaker during that time. Is that the kind of change you want? We all know what we went through for nine, 10 years,” Poe said.

She pointed out that the Arroyo presidency was marked by corruption, high prices of basic goods and gasoline, and weakening of the peso against the dollar.

People want change, but “not the kind of change that would bring us to a more desperate situation,” she added.

Sen. JV Ejercito, whose father, former President Joseph Estrada, was replaced in 2001 by then Vice President Arroyo after the now mayor of Manila was ousted in a popular uprising, said the situation in the House must have been so bad for Arroyo to be considered for Speaker.

Arroyo’s rise to the speakership is at odds with the campaign against corruption of the Duterte administration, Ejercito said.

‘Debacle’ at the House

Sen. Risa Hontiveros said the “debacle” at the House was a reflection of the “chaos and incompetence plaguing the Duterte government.”

According to Hontiveros, it was a sign of weakness that the President’s allies, in full view of the country and the international community, squabbled over power just minutes before he was to address a joint session of Congress.

“They chose to disrespect their own President and attend to their own ambitions in full view of the nation. For almost an hour, it seemed that nobody was in control,” Hontiveros said.

“This is the true state of the nation. It is petty infighting, backstabbing and brinkmanship, all done at the people’s expense. This is nothing short of an embarrassment. It is a clear failure in leadership,” she added.

Ombudsman Conchita Carpio Morales, who prosecuted the graft cases against Arroyo, said she respected the choice of the members of the House even if she disagreed with the Supreme Court’s 2016 decision.

“We were so clueless at the plenary [about] what’s going on. There was no official [announcement] that there [would] be voting. No official order of Congress leader as to what we [would] do,” Bordado said.

“It’s just the whole thing again. It is a pity she has returned to power,” Mananzan said in an interview on Monday.

Editha Tiamzon, widow of UNTV cameraman Daniel Tiamzon, one of 58 people massacred by allies of Arroyo in Ampatuan, Maguindanao province, on Nov. 23, 2009, said her old fears returned when she learned on Monday that the former President was now the leader of the House.

“My fear resurfaced, as well as the rage that I felt over what happened to my husband. Her greed for power had killed 58 unarmed people,” Tiamzon said.

Emily Lopez, a cousin of reporter Arturo Betia, one of those killed, urged the widows and orphans of the Maguindanao massacre to be vigilant now that Arroyo was back in power.

“It’s possible that the perpetrators . . . will be acquitted,” Lopez said.

Erlinda Cadapan, mother of University of the Philippines (UP) student Sherlyn Cadapan who, together with another UP student, Karen Empeño, was abducted by soldiers in Hagonoy, Bulacan province, on June 26, 2006, condemned the election of Arroyo as Speaker.