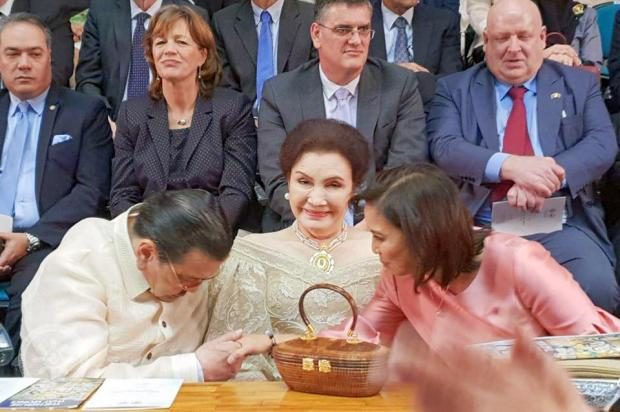 [It’s struck me as an internal party affair.]

[Puttin it into context, it happened during the President’s Sona. That moment is for the President. The whole country is watching. Everyone was excited to hear what the President had to say. So that incident grabbed everyone’s attention. For me, that’s wrong timing.]

Arroyo took over the speakership from Davao del Norte Rep. Pantaleon Alvarez just before the President’s Sona on Monday, after the majority of House members voted to reopen the session and pushed for a change in leadership even if Alvarez had adjourned it in the morning.

But it was still Alvarez who sat beside Senate President Vicente Sotto III at the rostrum during the Sona.

It is a tradition that the Senate President and the House Speaker sit beside each other during the event.

A special session was made after Sona, which formally elected Arroyo as the House Speaker by a vote of 184 members.

[It’s embarrassing that we showed everyone that wrestling for power in full public view. That gave the impression that the state of our nation is that it’s more valuable to prioritize the power struggle instead of the attempt, despite our difference, to unite and help each other solve the problems we’re facing.]

[The timing was not really right as it happened at moment that was supposed to be for the President – and we can see this even in the headlines now.]

Robredo refused to comment further on the election of Arroyo, preferring not to say whether acknowledged her as the House Speaker.

“It is a matter that has to be settled by the members of the House of Representatives,” she said. “Labas naman tayo doon [We’re not part of that].” /atm